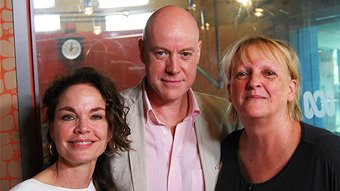 Listen to the audio clip here which has been extracted from the Conversation Hour program that was aired January 19 11-12 pm.

An email was sent to the ABC 774 Morning Program email contact as follows:
I was listening to the Conversation Hour Jan 19 about Fiddler on the Roof. Anthony Warlowe, who plays Tevye in the show, expounded false moral equivalence, comparing what happened in the shtetls where the Jews were warned that the Cossacks would ransack their homes with the flyers that Israel scattered over “parts of Palestine” during wartime to warn of the bombing of Hamas militants in response to their incessant rocket attacks. To compare the killing of innocents with the eradication of terrorist infrastructure is ludicrous.
As a descendant of people who were massacred in the pogroms I found Warlowe’s comments very offensive and I would like you to pass this information on to him.

Jon Faine has replied that he will pass this message on to Anthony Warlowe’s publicist and hopefully it might straighten him out a bit.