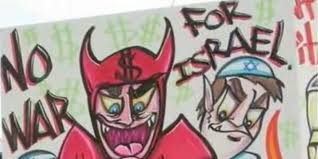 Anti-Semitic anti-Zionism on campus – how should universities respond?

By Gregory Rose, University of Wollongong

There was a significant development in the global fight against anti-Semitism last week when the .

The principles, which were written in response to a rise in anti-Semitic anti-Zionism on campus, were carefully balanced to accommodate both freedom of speech and freedom from discrimination.

The University of California (UC) principles offer an imperfect but useful model for how to draw a line between anti-Semitism and legitimate academic and political discourse.

In March 2015, Rachel Beyda’s nomination to the Judicial Board of the University of California, Los Angeles’ undergraduate student council was initially voted down on account of her Jewishness, lest her identity bias her judgement.

Elsewhere, swastikas have been daubed on Jewish student clubs and campus residences.

A survey of 113 US campuses has shown that anti-Zionist activity is highly correlated with anti-Semitic targeting of Jewish students.

Further afield in the UK at King’s College London, anti-Zionist students stormed a lecture on Israel, breaking a window.

To clarify terminology, Zionism is a movement originally for the re-establishment, and now for the development and protection, of a Jewish nation in what is today Israel.

Zionists differ as to how Israel’s security might be maintained. Borders were fixed with neighbours that made peace treaties (Egypt and Jordan) but have not been set with those that maintain a formal (Lebanon and Syria) or informal (Palestinian Authority) condition of armed conflict.

Conversely, anti-Zionism opposes the existence of a self-determined Jewish nation in the Middle East.

Anti-Zionists have differing views as to how the existence of Israel should be resisted, ranging from peaceful opposition to violent removal.

The introduction to the Regents’ report names anti-Zionism as a form of discrimination in cases where it “demonises”, uses “double standards” or “delegitimises”.

It draws these from definitions used by the US State Department and presents them as alternative anti-Semitic forms of action, although the three often come together.

If individuals are credibly accused of specific crimes, that is not demonising. Yet, if an accusation is non-specific, manifestly unfair, or directed against a class, then it demonises the class, expressing merely hatred of them.

Israel tends to be the only country advocated for dismantling, thereby applying a double standard, and “Nazi Zionists” are demonised. However, there is room for delegitimising that is not discriminatory, at least in theory.

“Delegitimisation” of a nation can be principled opposition to it as to all nationalisms. Or it can be part of an argument for a country without necessarily declaring its ethnicity. Neither of these is discriminatory.

The first case describes a position that is not so much anti-Zionist as universally anti-nationalist. In the second case, people of a country can democratically determine its character, for example Jewish, Palestinian or binational, if they want.

However, in this case, anti-Zionists go on to argue also that Israel’s borders must be changed first to include the “West Bank”. The intention is to create a “one State solution” for Jews and Arabs that will eliminate Israel’s Jewish character by means of demography, or possibly by civil war. Rather than democracy, it promotes the delegitimisation of a Jewish nationalism in favour of a competing Palestinian nationalism, using a double standard.

For Jews, the land of Israel is a central part of their ethnic, religious, cultural and national identity. To deny land as part of peoplehood for Jews but not for others, discriminates against Jews.

Palestinian nationalism, unfortunately, has developed a line of rhetoric that defines itself in opposition to Jewish national independence in the Middle East. This uncompromising narrative is echoed on many campuses.

Defining anti-Semitic anti-Zionism in academia is problematic because it requires drawing boundaries around acceptable speech.

The UC’s report goes too far by suggesting that any delegitimisation of Israel, unqualified and on its own, is an indicator of discrimination.

In theory, it is not discriminatory if it is the expression of a universal anti-nationalism or of the popular preference of Israelis. But, in practice, delegitimisation is accompanied by demonising or double standards, which make it discriminatory.

In respectable universities in the Christian and Muslim world, anti-Zionism is unique for its unreasoning outrage, hate speech and violent demonstrations. It is not simply reasoned critique of Israeli policy.

Anti-Semitic anti-Zionism is a clearly perceptible phenomenon in universities. At least the University of California has, in a symbolic statement, recognised the problem.

This article was originally published on The Conversation. Read the original article.