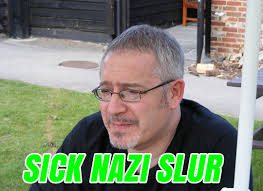 Calling time on the Nazi slur

Answer: they have all been compared to Hitler or have been Nazified.

It is the mother of all thoughtless analogies, comedic punchlines and clichés, tossed around carelessly and with infinite flexibility. And although we should know better, in today’s climate of hyperbole and cultural stupidity, anyone can be, or is, Hitler.

It seems that Hitler mania and delirium know no bounds and are an equal-opportunity slur. Nazis, who represent the ultimate evil, and conjure up the most horrific visions of suffering and depravity, are appearing in our culture with disturbing frequency and obscenely littering our public square.

We have soup Nazis, grammar Nazis, eco-Nazis, femi-Nazis, nico-Nazis, health Nazis, jazz Nazis, ticket Nazis, lunch-box Nazis and traffic Nazis, to name but a few. Consider, if all these people are Nazis, how terrible could the real Nazis have been?