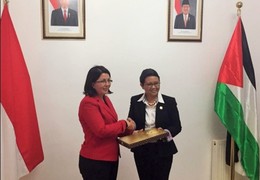 Fresh from hosting 57 countries over March 13-14 at a special two-day Organisation of Islamic Cooperation (OIC) summit on the Palestinian question, Indonesia’s diplomatic foray into the issue was set to be symbolically crowned with the opening of an honorary consulate in Ramallah and meetings with Palestinian leadership. But Israel refused to grant Indonesian Foreign Minister Retno LP Marsudi an entry visa from Jordan to the West Bank, because the Minister declined to meet with Israeli officials in Jerusalem.

Responding to questioning in the Knesset, Israel’s Deputy Foreign Minister Tzipi Hotovely revealed that Israel and Indonesia had come to an understanding during secret meetings in Jakarta in the days preceding, stipulating that a visit by an Indonesian official to the West Bank would also be accompanied by a meeting with Israeli officials in Jerusalem. In bypassing Jerusalem, the Indonesian FM “understood that she is going against the rules that Israel had set,” Hotovely said. (Indonesian officials since have denied any such meeting took place.)

Retno conducted her business from Indonesia’s Embassy in Amman, where she met her Palestinian counterpart Riad al-Maliki and installed noted Palestinian businesswoman Abu-Shusheh as honorary consul for Indonesia.

(Only eight Indonesians are officially listed as living in the Palestinian Authority, although around 50,000 Indonesians visit the region annually, while Indonesian-Palestinian trade in 2015 stood at US$3.67 million.)

Normally, Israel allows foreign ministers from Arab and Muslim countries to travel to Ramallah without visiting Israel. But the decision in this case was in line with Israel’s current policy for Western countries with whom it has diplomatic relations, requiring diplomatic visitors to the PA to also stop by in Jerusalem.

The fact remains that no high level Indonesian diplomat at the level of foreign minister or president has ever visited Israel.

Back in Jakarta, an article from Indonesia’s official news agency Antara strongly backed Indonesia’s stance, insisting that bilateral ties with Israel would only be established “when the Zionist regime ends its occupation of Palestine”. The article also praised FM Retno: “By refusing to meet Israeli officials, Minister Retno has demonstrated consistency in Indonesia’s foreign policy, and most of all, her courage to say no to the colonialist regime.”

However, the two countries’ pragmatic business and interpersonal ties are set to continue, despite the diplomatic stand-off and Indonesian statements made during the OIC summit.

In his closing speech at the OIC summit, President Joko Widodo [Jokowi] urged the international community to boycott goods produced “in or by the illegal Israeli settlements.”

While this call was well received within the OIC meeting, not all observers saw the move as credible.
“Jokowi has merely jumped on the BDS bandwagon. Politically, it will no doubt pacify Indonesian Muslim constituents. However, it’s difficult to imagine the initiative will receive measurable popular support,” wrote Johannes Nugroho in the Jakarta Globe.

“The average Indonesian consumer may profess sympathy for the Palestinian cause but not overly so that they would deny themselves much-needed goods,” he continued. “Some of the [brand] names denounced as ‘Zionist’ are reputable producers of daily essentials… making the recommended boycott both untenable and inconvenient.”

Indonesia can ill-afford giving up the chemical-related products and high technology goods it imports from Israel. This includes vital medical and scientific equipment, as well as electronic and telecommunications products widely used by Indonesian companies and consumers.

Anton Hermansyah in the Jakarta Post explored the technicalities of boycotting Israeli goods, noting that while the mandatory declaration of the country of origin for all imported goods makes a boycott possible, “It is also possible for Israel to do the same thing to Indonesian products,” he said.

The total value of trade between Indonesia and Israel, mostly in the non-oil and gas sectors, reached US$194.43 million in 2015, with Indonesia exporting $116.71 million in various commodities, including palm oil and rubber, to Israel.

Responding to public scepticism of the boycott call given the extent of Indonesia-Israel trade, Indonesian presidential spokesperson Johan Budi said the boycott was meant for Israel’s policies in Palestine, not the goods literally.

“It was not meant that way, boycotting the goods. The context was boycotting Israeli policies and its various bans in Palestine,” he said, asserting that the decision to boycott “Israel’s policy on Palestine” has been agreed in the recent OIC Summit.

Luhut Pandjaitan, Indonesia’s Coordinating Minister for Security, Politics and Legal affairs, elaborated further, applying some previously absent nuance to Indonesia’s “boycott” call. “Boycott was only the spirit… Many of those products were produced by fellow Palestinians. We should not take steps wrongly that would eventually [harm] our brothers in Palestine,” he said.