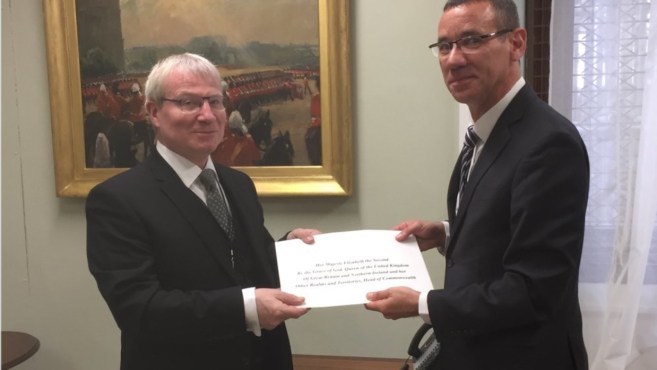 Australian-born Mark Regev has arrived in Britain to take up his post as Israel’s new ambassador to the UK.

The former Mount Scopus student, who made aliyah in 1982, said he is ‘excited to be here’, upon presenting his credentials at the Foreign Office in London on Monday.

It was announced in August 2015 that Regev, a former foreign media spokesman for the Israeli Prime Minister Benjamin Netanyahu, would succeed Daniel Taub as the ambassador.

President of the Board of Deputies of British Jews Jonathan Arkush, welcomed Israel’s new ambassador. He said: “We are delighted that Prime Minister Netanyahu has chosen someone as high calibre as Mark Regev to serve as Israeli Ambassador to the United Kingdom.

“Over the years Mr Regev has worked tirelessly to ensure that Israel’s voice is heard in the international media, never shying away from tough questions and setting out Israel’s case with clarity and erudition. His deep knowledge of the Middle East and Europe stand him in good stead and we very much look forward to working with him in his new role.”