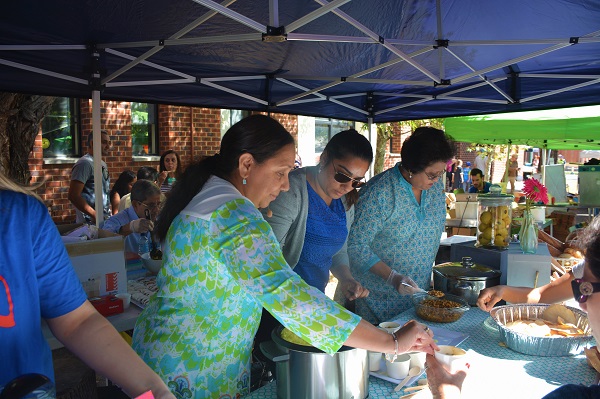 What’s curry got to do with Jewish food? Heaps, say Salome Erulkar and Jennifer Mordechai, Mumbai-born Jews who immigrated to Melbourne in the nineties.

At the In One Voice Jewish Street Festival held in Melbourne recently, Salome and Jennifer demonstrated the relevance of curry and the use of spices in Indian Jewish cuisine to the public. They prepared three different dishes that are a regular feature in their homes and served them so that everyone could have a small taste of their cuisine.

Festival Manager Judith Weizman says most people are not aware of the large Jewish community that settled in India around 175BC.

“Jewish migrants settled in and around Mumbai in the eighteenth century and then in a few other places. Often referred to as the Bene Israel (Sons of Israel), Jews in India experienced little anti-Semitism and they developed good relations with the local community in what was a predominantly Hindu society,” Weizman says. “It is estimated that there were 6,000 Bene Israel in the 1830s; 10,000 at the turn of the twentieth century, and 20,000 in 1948, which was the peak. Since then, most of the population has migrated to Israel, but there are still eight synagogues in Mumbai.”

There are primarily three Jewish communities in India. These are the Bene Israel community (to which Salome and Jennifer belong), Baghdadi and Cochin communities.

Speaking to Indian Link at the recently held In One Voice Jewish Street Festival, Salome and Jennifer reminisce about their fond memories of a childhood growing up in Mumbai.

“We had a normal upbringing and never faced any discrimination because of our Jewish roots. We would always share food with our neighbours and take part in each other’s festivals.”

Due to various personal reasons, both Salome and Jennifer migrated to Israel and from there to Australia with their respective families. Both are of the opinion that life in Melbourne is quite similar to India, where people of all different nationalities, races and religions co-exist peacefully. ‘Live and let live’ is Jennifer’s outlook on life, and she truly believes that Australia’s vast multicultural community is the best example of that.

Food has always been an important part of their lives and both of them take exceptional pride in cooking and teaching traditional Indian Jewish recipes so that they are preserved for future generations. They have contributed to the cookbook Curry not Gelfite Fish, which was published by the National Council of Jewish Women two years ago and funded by the Victorian Multicultural Commission.

“Indian Jewish food involves a lot of vegetables, chickpeas and lentils, but we also cook mutton, chicken and kosher fish (fish with scales). Naturally, we use a lot of spices too!”

Salome also loves to cook her traditional halwa which is made from coconut milk, nuts, cornflour, cardamom and sugar; a recipe passed down generations and one that she prepares lovingly for most special occasions.

Jennifer’s favourite dish is a traditional Indian Jewish recipe which is known as puri but very different from the regular puffed fried flatbreads that most of us are familiar with. This one is a layered puffed pastry stuffed with sweet semolina and then deep fried. Jennifer says that she tries to make this dish whenever they are breaking a fast; it is her way of keeping the tradition going.

Jennifer and Salome have very kindly shared with Indian Link readers the recipe for their delicious black-eyed bean curry. Do make this at home and enjoy with your family.