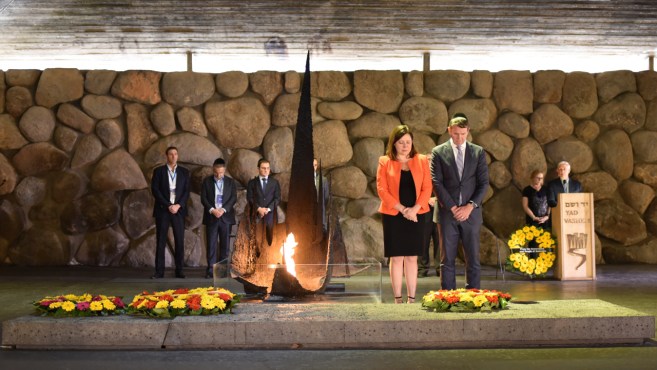 Baird: ‘Nothing can prepare you for Yad Vashem’

More than a quarter-of-an-hour after she welled up in the Hall of Names, there were still tears on her face. Then, a visit to the Children’s Memorial and a wreath laying in the Hall of Remembrance brought her emotions to the fore again.

Her husband Mike Baird, Premier of New South Wales, stood fixated by the guide during parts of their 90-minute tour of Yad Vashem — including a segment when they were taken to walk on original cobbles from the Warsaw Ghetto.

He admitted that the tour had drained him emotionally by the time he talked to The AJN at the end. “Nothing can prepare you for that,” he said.

Kerryn Baird nearly broke down again when asked for her thoughts. “What moved me the most was that these atrocities were conducted in daylight, and people stood and watched,” she said.