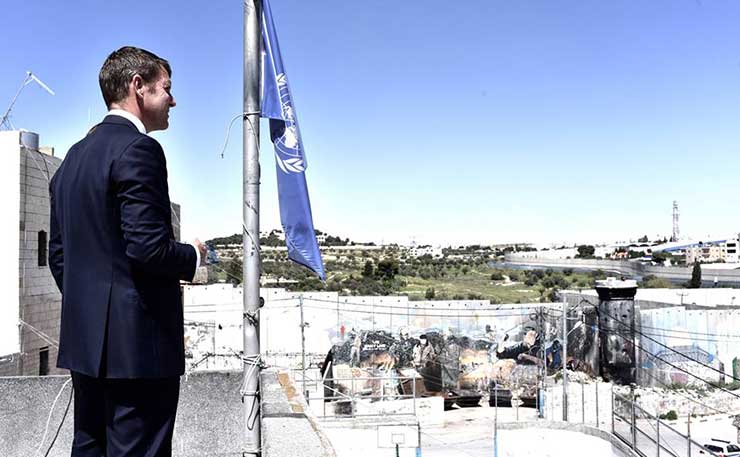 Mike Baird Becomes NSW’s Most Pro-Israel Premier Ever: The Left Celebrates His Sympathy For Palestinians

The NSW Premier’s one-day trip to the West Bank was a victory for smart political propaganda, writes Michael Brull.

Over the last few days, a lot of people on the left have gotten excited about New South Wales Premier Mike Baird’s trip to the West Bank. This is based on the view that he has expressed unusual sympathy for the Palestinians. In fact, his trip probably makes him the most pro-Israel Premier of NSW we have ever had.

Chris O’Keefe presented a story on the visit for Channel 9. The story seemed to evince unusual sympathy for the Palestinians. It presented life for Palestinian refugees as difficult, and claimed thousands of them “fled” the “violence” to come to Sydney.

The report identified the Palestinians as living under “occupation”, but Baird himself did not. The reporter observed that the land was “littered with checkpoints”, thus “freedom of movement does not exist here”.

He also had a sound grab from a United Nations official discussing Israeli soldiers using tear gas and “a lot of force” against Palestinians.

Baird did not say those things. Baird expressed sympathy for the lives of Palestinians, without expressing any understanding of why their lives were hard. He simply expressed the view that the “impacts of that conflict” were confronting.

Baird posted twice on Facebook about his trip. One post is here, noting that it was going to be the first visit by a (sitting) NSW Premier.

In another post, Baird commented on meeting Palestinian children in a West Bank refugee camp, Aidi. He asked what their dreams were, and one replied “It’s hard to have dreams when you know they can’t come true”.

Baird called this “heartbreaking”. Why do the kids lead miserable lives? Well, “I don’t know where the cycle of thousands of years of violence ends.” After all, “all kids should be able to dream… they should have hope of a better future.”

That more or less exhausts Baird’s expressions of sympathy for the Palestinians. Baird then praised the “team” at Aida, funded by the Australian government, who are “helping these kids”.

Judging from Baird’s comments – about “thousands of years of violence” – a casual observer might think that the conflict is an ancient one about religion, or some vague force that causes Palestinian kids some unidentified type of deprivation. Not that hundreds of thousands of Palestinians were expelled from their homes when Israel was created some 68 years ago, and that that continuing dispossession is why they are living in refugee camps rather than returning to their homes.

The slim scraps of sympathy Baird carefully presented were eagerly seized on by many. Yet a report in the Jewish News on the visit shows clearly that the visit to the West Bank was a trivial side issue for the delegation.

Baird’s trip to Israel – the first by a sitting NSW Premier, according to journalist Nathan Jeffay – was partially spent with “a delegation of business, research and public sector leaders, which has been coordinated by the Australia-Israel Chamber of Commerce (AICC) and the NSW Jewish Board of Deputies (JBOD)”.

Aside from sight-seeing, “the Bairds spent most of their time delving into Israeli innovation, putting the emphasis of the trip firmly in the economic sphere”.

Jewish Board of Deputies President Jeremy Spinak claimed the trip would promote increased economic ties between NSW and Israel, and promote Israel’s image in Australia. NSW Police Force Commissioner Andrew Scipione joined the trip to learn about cyber security. Another collaboration that is apparently on the way is the Universities of Sydney and New South Wales using Hebrew University research on medical cannabis. Baird is eager for this to “start tomorrow”.

Spinak said, “People at home are starting to see Israel in its true light, as the ‘Start-up Nation”. Baird apparently got a similar script, describing Israel as an “incredible nation” that is “leading the world in so many ways”.

Jeffay reported that, “Baird said he believes the trip will come to represent a ‘critical turning point’ in relations between NSW and Israel, ‘going from being … allies and friends to significant collaborators and economic partners’.”

The Jewish News observed that the trip included “some politics”, such as “a day in the West Bank which included a visit to a refugee camp that receives Australian aid money, and a meeting with Israel’s head of state. President Reuven Rivlin thanked Baird for Australia’s ‘strong position against extremism’”.

Baird also visited occupied East Jerusalem. He went to the Temple Mount, the Western Wall, and visited the Church of the Holy Sepulchre. He said he found the Western Wall was “very profound”. He did not find the time or interest to comment that East Jerusalem is illegally occupied, and its annexation by Israel has been rejected by the entire world, including the United Nations Security Council.

Not so long ago, the NSW ALP was debating scrapping propaganda tours, or at least balancing them with equal time spent in Palestine. Those attempts failed, and that was regarded as a defeat for sympathisers with the Palestinians.

Baird has gone on a propaganda trip for the express purpose of improving NSW’s relationship with Israel, and yet many of the same Palestine sympathisers are celebrating it as a triumph.

Whatever else one might say about Baird, one cannot deny that he is a very effective politician.