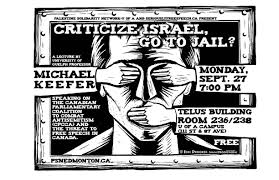 Is Israel above criticism?

Naz Shah, a Labour MP for Bradford in the UK, has been suspended from the party, accused of antisemitism over a post she shared on Facebook two years ago.

As tends to happen, that comment was spotted by someone and brought to the media’s attention in Britain, and she’s been stood down because the party believes it is offensive and unacceptable.

Shah has apologised. She said she never meant to cause offence, and it was foolish to share that post.

It was really foolish – she’s an MP. The Middle East peace process is not something you can make fun of when you’re a politician.

However, I would question whether her ‘crime’ in this case is so severe that she should be stood down.

Compare her comments too with those of Donald Trump, who has said that Muslims should be banned from entering the United States. And yet he is on his way to the Republican nomination and a tilt at the White House.

And that’s okay? We’re okay with suggesting everyone of Muslim faith should be banned from entering the US? And this is where the situation gets confusing.

Why is it that a criticism of Israel is so often viewed as a criticism of the Jewish faith? You can criticise any government in the world, any regime, and state, and it goes unnoticed – except Israel. You cannot criticise Israel without being attacked for it.

In 2014, I was very critical of the IDF when it bombed a United Nations school in Gaza, which was sheltering some 3000 civilians, despite the fact the UN had given the IDF the co-ordinates for that school many, many times to ensure it wasn’t targeted.

Still, it was bombed and people were killed.

And when I criticised Israel for that, the response was extraordinary. The letters, the emails, the abuse was quite unlike anything I’d had before – apparently I was antisemitic!

And yet what I said was that the IDF was wrong to bomb a school because children had died in Gaza.

Israel is a country, it seems, that is above criticism. And why is that? Why can we not question the morality of a country’s actions?

Is it because in New Zealand we live in a secular state so to us state and religion don’t go hand-in-hand. Or do they?

Story in the Sunshine Coast Daily and Tweed Daily News from NewsTalk ZB in New Zealand.
There are comments to peruse at both community newspapers.