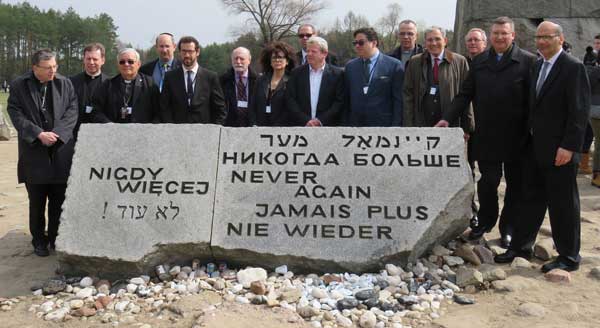 I have  felt a firm grip on my arm – the sudden, unexpected gesture at once a sign of solidarity and an appeal for support.

We, amongst Jews and Catholics from five continents, were standing on the grounds of the Treblinka Murder Camp, fighting back tears as we sang, together, psalms and hymns.

We had already spent two days together, as participants in the International Catholic-Jewish Liaison Committee’s twenty-third Consultation, this time in Warsaw, Poland.

We had honoured Polish non-Jews who, at the risk of their own lives, had saved Jewish people during the Shoah, and heard passionate and inspiring speeches by the Vatican’s Cardinal Kurt Koch and Poland’s Chief Rabbi Michael Shudrich.

Jewish and Catholic scholars had delivered papers on the refugee crisis, antisemitism and the persecution of Christian minorities.

I had led an engaged antisemitism session in tandem with Professor Jan Grosfeld of the Polish Bishops’ Conference, as each working group had Jewish and Catholic co-chairs.

The Treblinka trip was led by Rev. Professor Pawel Rytal-Andrianik, an extraordinary scholar and a dedicated worker for his church.

Before the memorial service, a group of us spontaneously gravitated towards a sign declaring “Never Again”, where we stood together in silence.

Rabbi David Rosen, who is one of the most impressive speakers and important writers of our time, led the formal ceremony, with moving words and beautiful, melodic intonation of prayers.

After leaving Treblinka, we visited a Catholic Social Service Agency in Warsaw and the Museum of Polish Jewish History.

In these places, the fact that Jews and Catholics were there to hear each other’s questions and share observations was extraordinarily fruitful.

As the Consultation continued, a theme beyond the announced topic, “The ‘Other’ in Jewish and Catholic Tradition: Refugees in Today’s World”, emerged: Last year we marked the 50th Anniversary of the Catholic Church’s Nostra Aetate declaration – which repudiated claims of Jewish responsibility for deicide in Catholicism and condemned antisemitism – but now we needed to ensure the second fifty years is just as significant and mutually beneficial.

While in Warsaw, it was my privilege to spend time with former Members of Parliament now engaged in a range of activities aimed at making Poland a better place and met Muslims and Christians who lead interfaith dialogue.

Through the Never Again Foundation and its brave, practical, intellectual leader Dr Rafal Pankowski, I met some fascinating players in Warsaw life, and spoke at a class on racism at the prestigious Collegium Civitas.

Another highlight was meeting with, and talking to, young Jewish Poles (and their friends) at Hillel at the Jewish Community Centre (JCC) where we spoke about Australia, inter-religious dialogue in Asia and life for young, progressive-minded people in contemporary Poland.

After a warm welcome on my final morning at an over-crowded kosher brunch at the JCC, I could have left Poland overwhelmed by the interesting and positive encounters.

But, in the company of an expert in Polish history and contemporary affairs, I witnessed an enormous rally of “nationalists” alleging a Russian/liberal conspiracy against Poland.

We saw people carrying books on the theme of a Jewish plot to take over Poland, and a number of individuals carrying banners calling for Jesus Christ to be crowned King of Poland, as well as a range of racist and far-right insignia.

Poland may have some outstanding figures, but they face immense challenges in a difficult political environment.

That reality made the work of the ILC, and of my friends and colleagues in the Jewish, Catholic, Anglican and Muslim communities, locally and globally necessary and significant.

This article is featured in this month’s Australia/Israel Review, which can be downloaded as a free App: see here for more details.