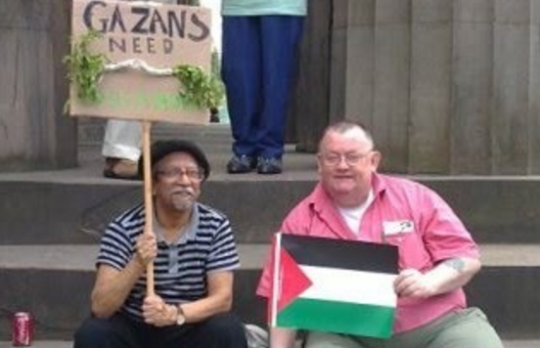 Miqdad Al-Nuaimi is a Labour councillor in Newport. Cllr Al-Nuaimi has repeatedly compared Israel to the Nazis; he also describes the “connection” between Israel and ISIS as “very interesting”. Guido has just spoken to him on the phone – Cllr Al-Nuaimi confirmed this was his Twitter account, he said he could not comment on tweets he made in the past but added he thinks there is a link between Israel and ISIS. Goodbye councillor…

Terry Kelly is a Labour councillor in Renfrewshire. On his blog Cllr Kelly repeatedly rants about the “Jewish lobby”. In a blog about Joe Biden failing to condemn Israel’s actions in Gaza he writes: “if you ever wondered how powerful the Jewish lobby is in America there is an example for you right there”. In a post about Obama’s policy towards Israel Cllr Kelly writes: “Have you stopped to ask why? It’s because the American Jewish Lobby is extremely powerful and it has it’s boot on Obama’s neck”. In another post he claims the Jews are trying to rig the Oscars: “it might not happen because there is a powerful Jewish lobby campaigning against the film”. A fourth post sees him describe “a vicious campaign by the all powerful American Jewish Lobby”. Cllr Kelly also compared the actions of Israelis to the Holocaust, going on to criticise Jews worldwide:

“this is being done by the survivors of the Holocaust, it beggars belief that the Jewish people who suffered so much could treat innocent children this way but that’s what they are doing… There must be millions of Jews all around the world who abhor what Israel is doing, why don’t we hear their voices, when will they stand up and shout ‘enough’ ?”