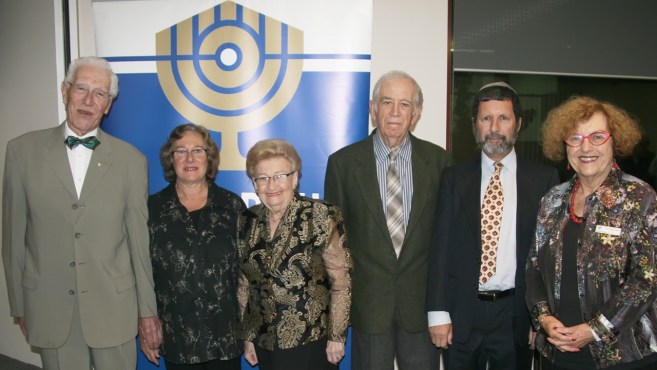 THE annual B’nai B’rith Victoria Menorah Awards have been presented to four members of the Jewish community, acknowledging their longstanding commitment to volunteering.

Hilda Rosner has been volunteering at the Lamm Library every Monday for 21 years, and has also given of her time to communal organisations including Hatzolah, Magen David Adom (MDA) and JNF.

She said she was “humbled and excited” to receive a Menorah Award.

“I was taken by surprise because I just do it for the labour of love,” Rosner, who is in her 80s, told The AJN.

Iain Messer similarly said he was “chuffed” to receive the accolade.

Messer’s voluntary work has been both within and outside of the Jewish community. He has longstanding roles at the Boroondara Volunteer Resource Centre and Melbourne Tourism, while he is a former president of B’nai B’rith and has served its Courage to Care program for approximately 15 years.

Recipient Bev Gelbart enthused she has had the opportunity to work with many wonderful people through a variety of voluntary pursuits over the years.

Among these endeavours, Gelbart has held numerous roles with Kedem synagogue, been involved in the establishment of Mitzvah Day, volunteered at Stand Up, and been vice-president of the Union for Progressive Judaism.

Finally, Leonid Shvartsman has assisted organisations including the United Israel Appeal, JNF and MDA. He has also worked tirelessly with the Russian Jewish community, whom he paid tribute to in his speech.