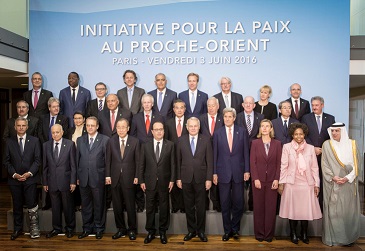 Pity François Hollande. The French President’s country is beset by terrorism, his overseas military missions – in Libya, Mali and Syria – are in tatters, his labour unions are in full revolt, while his personal popularity ratings are at a record low of 13%. How to placate his domestic Muslim population, divert attention from his rioting workers, burnish his own diminished standing and restore la gloire de la France? As the floodwaters of the Seine threatened to drown the French capital and ISIS promised to wreck the Euro 2016 football tournament, the answer became obvious: convene a Middle East peace conference. And then compound the charade by not inviting the major protagonists, Israel and the Palestinians.

Not even a massive publicity blitz could salvage the event from utter irrelevance. The Russians, Germans and the British recognised the futility of the occasion and, sadly, discovered they had prior commitments that prevented attendance. Not so the indefatigable US Secretary of State, John Kerry, whose valiant efforts to broker a two-state deal collapsed under the weight of Palestinian intransigence in April 2014. While he agreed to attend the Paris meeting, though, a State Department spokesman warned that the US would effectively be a silent partner. It would not produce any specific proposals but would “listen to the ideas that the French and others may have.” In the event, Kerry refused to do anything but sign off on “a general, non-committal statement.”

And so, the Middle East Peace Conference – now an empty husk – was ridiculed as “an extended photo opportunity” in the words of the New York Times. It ended in ignominy after just three hours on a miserable Friday afternoon last month. A joint communiqué sounded a brave call for a negotiated solution leading to “two states, Israel and Palestine, living side by side in peace and security.” Not exactly the “wow” moment that Hollande was hoping for.

Read the full story by Douglas Davis on the AIJAC website