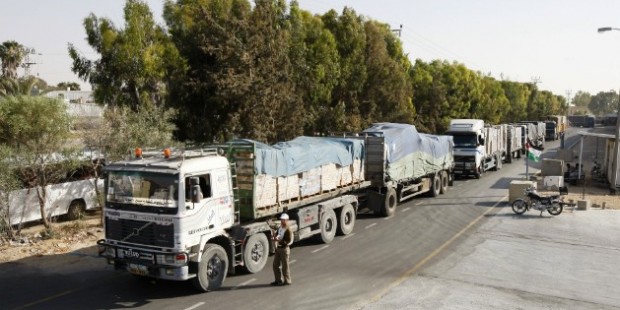 The Gaza “siege” myth lives on

Perhaps on some level it isn’t surprising that it still happens – though, on another, it is nonetheless shocking, because it is so easily disproven. I’m speaking about how Hamas and other Palestinian groups like to present Israel’s blockade of military items into Gaza as a “siege” – and too many people who should know better are happy to go along.

According to the Oxford English Dictionary, a “siege” is “a military operation in which enemy forces surround a town or building, cutting off essential supplies, with the aim of compelling those inside to surrender.” It is obvious that this is not an accurate description of Gaza’s situation. Israel is not cutting off “essential supplies”, nor is the intention to compel Gaza to “surrender” – there is no significant body of opinion in Israel calling for a resumption of control over Gaza. The blockade is intended to limit Hamas’ ability to wage war against Israel.

Hamas’ intention in using the term is pretty clear – it falsely implies that Israel is starving the Palestinians of Gaza, as happens in real sieges. Further, it also allows Hamas to pose as conducting brave “resistance”, fighting Israel to lift the “siege” – rather than the reality of engaging in military aggression that predated the blockade and caused it to be imposed.

Less understandable is how so many other opinion leaders in Australia are prepared to echo the Hamas line. For example, ANU academic Amin Saikal wrote in the Canberra Times on April 20 about “Israel’s siege of Gaza and imposition of appalling living conditions on the tiny Strip’s 1.8 million Palestinians.” Former academic Stuart Rees wrote of “the endlessly cruel siege of Gaza” on Online Opinion on April 28.

Greens Senator Lee Rhiannon said at a rally on May 15, “Gaza has been under siege for almost nine years” while her party’s foreign affairs spokesperson Senator Scott Ludlum condemned “the bitter, endless siege of Gaza” in a submission to the Australian Institute of International Affairs.

Read the full story by Tzvi Fleischer in AIR on the AIJAC website.