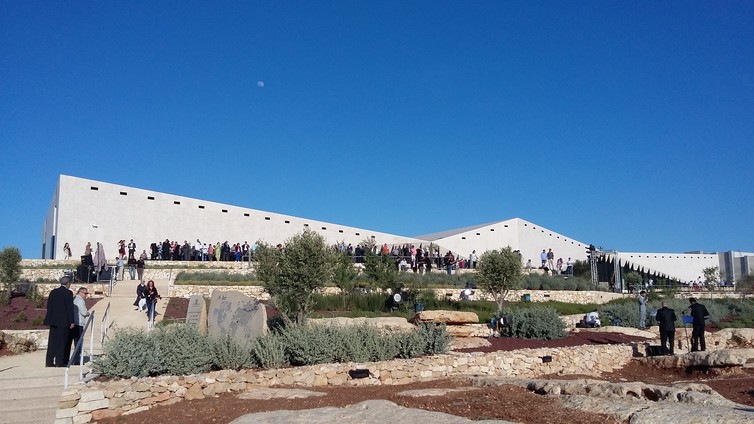 The Palestinian Museum opened without artefacts, but it’s still a beacon of hope

An astonishing new cultural institution for the Middle East has now opened to the public. Situated on a hilltop near Ramallah in the West Bank, the $24m Palestinian Museum was opened officially in a gala inauguration ceremony on May 18. Over 700 guests mingled on a broad pavilion in the afternoon sun, while musicians played a classical Arab repertoire in the terraced gardens below. As night fell, dancers performed in a small amphitheatre, and a lightshow was projected onto the museum’s white limestone façade.

Yet the museum opened without any artefacts in its galleries or artworks on its walls.

The empty halls quickly came to define the Palestinian Museum in the international press. “Palestinian Museum Prepares to Open, Minus Exhibitions,” declared a pre-emptory report in the New York Times (May 16). The absence of artefacts has featured in the headlines or opening sentences of every media report since.

For Omar al-Qattan, the museum’s chairman, the building’s timely completion was cause for celebration enough. Qattan’s message of positivity was clear: “We thought, ‘let’s celebrate the building’ because in the current circumstances … it would be wonderful to have an affirmative, celebratory building,” he told the New York Times. “Symbolically, it’s critical.”

Yet the museum can’t seem to escape the symbolism of its empty halls. “Oh, The Irony! Palestinian Museum Opens With No Exhibits,” exclaimed the conservative tabloid Israel Today, before making the staggering claim that an empty museum symbolises a people without culture.

More nuanced reports in the New York Times and Washington Post adopted a gentler yet still derisive tone, in which the empty galleries symbolised a failure of Palestinian leadership. “It supports the impression that the Palestinians simply cannot get their act together, that they have built an empty monument,” stated The Washington Post. To The New York Times, the empty galleries were apparently yet another example of a cultural initiative that had “failed to gain traction and find consistent leadership” since the Oslo peace accords.

The museum is not financed by the Palestinian Authority. Rather, it is the flagship project of Taawon (formerly the Welfare Association), an independent Palestinian NGO.

Nevertheless, focus on the empty galleries is partly explained by the museum’s earlier promotion of an opening exhibition called “Never Part”, which was to feature artefacts kept by Palestinian refugees since 1948. This concept was developed by former Director Jack Persekian, who resigned last year following differences with the museum’s board.

As Qattan explained to the Israeli newspaper Haaretz, the board hopes to realise something broader than a remembrance museum to the Nakba (the “catastrophe”), which is commemorated by Palestinians on May 15 each year to mark the displacement of 700,000 people in 1948. “We wanted to celebrate Palestinian culture and the present, young people especially, in a way that would allow us to look forward and not just to look back,” Qattan said.

More than its contents

While unusual, the opening of a museum without exhibits is not without precedent. The Jewish Museum in Berlin, for example, opened in 1999, but did not receive any artefacts until 2001. In this case, the opening celebrated the completion of an iconic piece of contemporary design by architect Daniel Libeskind. The building alone drew more than 350,000 people, demonstrating that a museum is more than the artefacts it holds.

The article in Haaretz has been the only report that I have come across that places the Palestinian Museum in this context.

Like Libeskind’s Jewish Museum, the Palestinian Museum is a striking example of contemporary design. Architect Roisin Heneghan, whose Dublin-based firm Heneghan Peng won the project in an international competition in 2011, sought to integrate the building with the stepped hillside on which it stands. The museum is approached through a series of terraced gardens featuring cereals, fruit trees and aromatic herbs that represent a horticultural history of the region. The building rises from the summit of the hill as three elegant limestone triangles with glass panels that mirror the terraces below.

The building is the first structure in the Palestinian territories to meet the green construction standard, and was awarded a rare Leadership in Energy and Environmental Design rating. It is now one of the largest public spaces in the West Bank.

The timely completion of the building is remarkable given the logistical difficulties presented by the occupation. Imports were reportedly subject to lengthy delays or sudden increases in costs, and materials were refused at the border. The landscape architect, Lara Zureikat, was not granted a visa to visit the site from her home in Jordan.

The museum’s new director, Mahmoud Hawari, hopes to install the first exhibits by the end of the year. And the museum will not be empty in the meantime, as the public can now visit this remarkable structure, and wander through its grounds.

This article is by James Fraser, Project Curator for the Ancient Levant, The British Museum and appeared on The Conversation website.