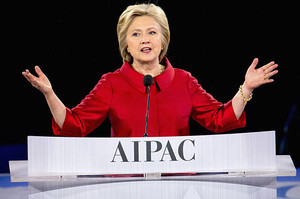 American Jewish leaders are on the edge of the abyss…

The American presidential elections have created an unprecedented climate of political chaos. Both candidates are reviled by the bulk of the electorate, many of whom intimate that they intend to abstain from voting.The polls originally predicted that Hillary Clinton would win by a landslide, but the odds have now dramatically narrowed and in this explosive environment, Donald Trump may well be elected.

American Jews are caught in this maelstrom. Regrettably, many of their leaders have seemingly hibernated and failed to speak out even when President Barack Obama maligned Israel. They justified their silence on the grounds that criticism of the president would shatter whatever still remains of bipartisanship. But these same constraints do not seem to apply when attacking the Republican candidate, Donald Trump. Nor were there any concerns of bipartisanship when liberal Jews correctly attacked the George H. W. Bush administration for open hostility to the conservative Shamir government.

The American Israel Public Affairs Committee paved the way for the current situation by treating bipartisanship itself as the goal instead of utilizing it as a means of achieving the primary objective – promoting the case for Israel. This was outlined last month in a comprehensive article in the online Tablet magazine by Bruce Abramson and Jeff Ballabon titled “The end of AIPAC’s Israel monopoly.” The article documents how AIPAC’s obsession of retaining the monopoly on Israel advocacy – in which, admittedly, it had achieved a tremendous track record of success – began to erode when it remained silent in response to Obama’s negative policies and biased condemnations of Israel. AIPAC also failed to speak out against J Street, which was undermining it with the assistance of the administration and falsely claiming to represent Jews at the grass-roots level.

Read the article by Isi Liebler on J-Wire.

[Isi Leibler lives in Jerusalem. He is a former president of the Executive Council of Australian Jewry.]