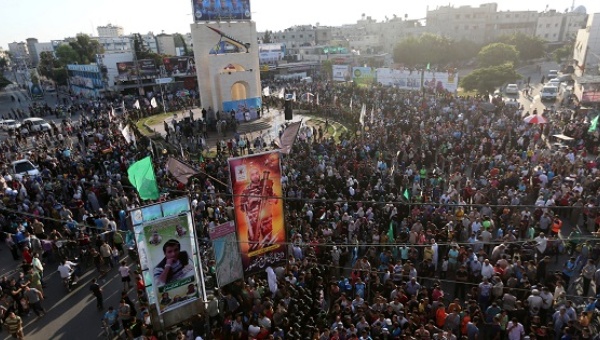 People in the Palestinian Gaza Strip said at least 30 Israeli airstrikes took place in the territory on August 21. The air strikes came after a rocket was fired earlier in the day from the territory into Israel, landing in an open area and injuring no one.

Gazans said on social media that airstrikes were taking place all over the strip. The Israeli military earlier confirmed it had struck two camps for the Hamas movement, which controls the strip.

“OVER 50 AIRSTRIKES ON #GAZA the WARPLANES r still bombing the worst night ever since the last war #GazaUnderAttack,” Basel Abuwarda, a doctor in Gaza, said in a tweet Sunday.

Ma’an news agency said at least five Palestinians were injured in the Israeli attacks. Observers said the intensity of Sunday’s attacks are part of the strategy of new Israeli defense minister, Avigdor Lieberman, who was appointed in May.

“Israeli new ultra-right Minister of Defense, Avigdor Lieberman, is flexing his muscles at the expense of Gaza’s residents,” Elizabeth Tsurkov, Research Fellow at the Forum for Regional Thinking, said in a tweet commenting on the recent airstrikes.

Earlier in the day the Israeli army said aircraft and tanks had targeted two Hamas posts. Hamas controls the Gaza Strip and has observed a de facto ceasefire with Israel since a 2014 war.

However, some small armed cells, some of which have pledged allegiance to the Islamic State group, have defied the agreement and occasionally launch rockets at Israel.

More than 2100 Palestinians, mostly civilians, were killed during the 2014 Israeli attack on Gaza, while 67 Israeli soldiers and six civilians in Israel were killed by rockets and attacks by Hamas and other militant groups.