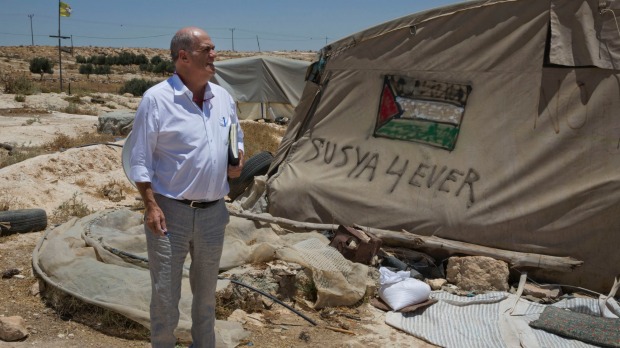 For a quick reality check on the current stalemate in the Israeli-Palestinian conflict, there’s no better place to visit than this little village of miserable huts and sheep pens in the middle of nowhere.

The hamlet in the hills south of Hebron has become an improbable proxy in a cold war waged among Jewish settlers, the Israeli government, Western diplomats, peace activists and the 340 or so Arab herders who once inhabited caves on the site and now live in squalid tents.

Israel’s military authority in the occupied West Bank wants to demolish the Palestinian community, contending that the ramshackle structures made of old tyres and weathered tarpaulins were built without permits and must come down.

The Palestinian residents insist they are not squatters but heirs to the land they have farmed and grazed since the Ottoman era. They say Israel wants to depopulate the area of Arabs and replace them with Jews.

This is nonsense, said Josh Hasten, international director for the pro-settler group Regavim, which has been pushing the Israeli government  to shove these “illegal squatters” off the land.

Mr Hasten described Susiya as part of a plot funded by the European Union and supported by the Palestinian Authority to assert rights that do not exist and create a “de facto Palestinian state” on land that should belong to Israel.

Most of the world considers the Jewish settlements on the West Bank to be illegal, a conclusion that the Israeli government rejects and which Foreign Minister Julie Bishop – who is about to visit Israel and the Palestinian territories before attending the launch of the EU-Australia Leadership Forum – has questioned.

Read the article by William Booth (from The Washington Post) in the Sydney Morning Herald.