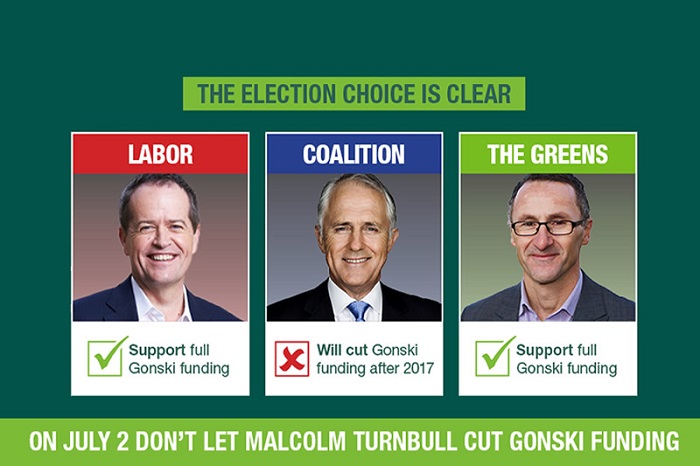 On the Fringe – the Australian Election result 2016

Most of the attention on the July 2 Federal election results naturally focussed on which party, if any, would control the House of Representatives and form government. However, keeping up a post-election tradition at the AIR, here is a look at how the parties on the left and right fringes fared.

While the Greens can hardly be called a minor party any longer, as seen in the July Review, some of the party’s views on certain issues, and especially those held by some members, are very concerning to the Jewish community.

The Greens would have mixed feelings about their results. They still hold only one seat in the House of Representatives – Adam Bandt’s Melbourne, while their Senate representation dropped from ten in the previous parliament to nine, with their Senate vote actually falling by 0.58% to 8.65% of the national total. On the other hand, their total vote for lower house seats rose to 10.23%, a swing of 1.58%.

While they failed to pick up any further electorates, as they had hoped, they came close in some seats.

In the inner Melbourne seat of Batman, the Greens recorded 36.23% of the primary vote, the highest of any candidate, achieving a 9.83% swing, and a two party preferred vote of 48.97%, with a 9.58% swing, making it a seat they could reasonably expect to gain at the next election.

They also turned the neighbouring seat of Wills marginal, gaining 45.12% of the two party preferred vote with a swing of 10.32%. Coalition preferences proved crucial in keeping both seats in ALP hands. In Melbourne Ports, they came close to relegating the ALP’s Michael Danby to third place once minor party preferences were distributed, which would have made it a very close battle between the Greens and the Liberals for victory.

However, in other seats where they had hoped to make significant inroads, such as Tanya Plibersek’s Sydney, Anthony Albanese’s Grayndler and especially Kelly O’Dwyer’s Higgins in eastern Melbourne, where they invested massive resources, they were disappointed.

One big winner in the election, Pauline Hanson’s One Nation picked up four Senate seats, two in Queensland and one each in NSW and Western Australia. Running Senate candidates in each state, the party gained 4.29% of the vote overall, but this varied between 9.19% in Queensland and 1.81% in Victoria. It also achieved a significant vote in the 15 lower house seats it contested, all in Queensland and NSW. Highlights were 20.9% in the Queensland seat of Wright, 19.16% in Hinkler and 17.82% in Maranoa, where it came second. Overall, One Nation averaged 12.5% in the seats it contested. Also of significance was the fact that, in directing preferences to the ALP, it played a crucial role in the ALP gaining the seats of Longman from the Coalition’s Wyatt Roy and Herbert from Ewen Jones.

Running Senate candidates in every state, the ALA only managed 0.74% of the national vote. Its results in the lower house seats it contested varied between 6% in Farrer in southern NSW and 1.61% in the inner Brisbane seat of Griffith, averaging 2.8% overall.

The most active of the smaller fringe groups, Rise Up Australia contested 31 lower house seats, including 18 in Victoria. Results varied from 5.76% in Brand in WA to 0.76% in Victoria’s Dunkley, with an average of 2.51%. Interestingly, this vote did not translate well to the Senate. There, the party gained only 0.26% of the national vote, and its 39,579 lower house votes in its stronghold of Victoria became only 10,166 in the Senate.

The Socialist Equality Party, basically the communists, averaged 0.07% in the Senate states it contested, while its three lower house candidates averaged 0.64%.

Australia First contested the Senate in WA, where it gained 0.22% of the vote, while its four lower house seats averaged 1.95%.

Finally, Love Australia or Leave founder Kim Vuga, who was reduced to contesting the Queensland Senate as an independent after failing to register her party in time, received just 172 votes, 0.01% of the total.

Read the report by Jamie Hyams in the Australia-Israel Review.