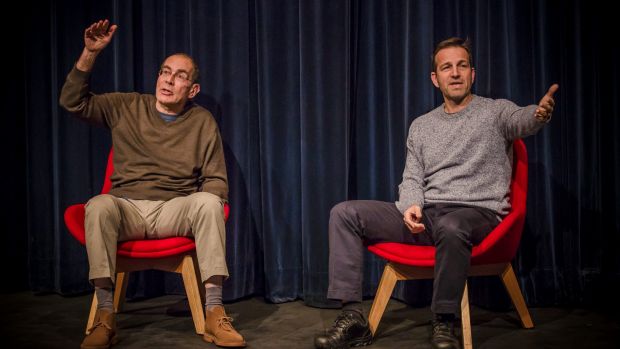 Two Jews walk into a theatre …

Two Jews walk into a theatre… announces its, primarily, comedic address in its well-worn joke-opener title. Actor Brian Lipson and choreographer Gideon Obarzanek perform in a largely unscripted two-hander that freely associates history, narrative and personal biography. Lipson, the son of London-based Jew (who served in the British Army) and Obarzanek of Polish descent via Israel converse as their fathers. Unearthed like sonic reels of home-movie footage, the conversations are overgrown by a thick patina of age, experience and identity.

Within its talky – often comedic – dialogue, Lipson and Obarzanek dissect the coincidences – and asynchronies – of Jewish identity that persist over time and across generations: The Six-Day War, or June War of 1967 (‘No one knew it was gonna be 6 days – by the time we got there it was gone’) and divergent paths of migration to London and Israel. At times, these become less a point of connection than a way to impose identity on another in the persistent desire to have one’s experience – and existence – ratified. Obarzanek senior criticizes: ‘Jews like you sit in your comfortable English homes/We fought for ourselves’. Lipson senior rails against him: ‘You look like a poster for the brown shirts. You look like the fascist you are.’

Read the review by Sally Hussey in the Performing ArtsHub.