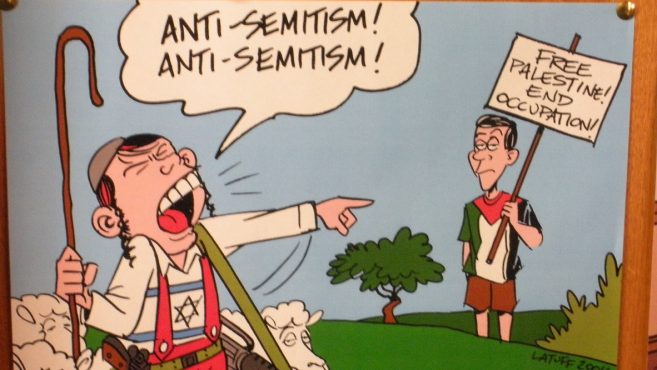 AN academic at the University of New England (UNE) in NSW – who controversially defended a student’s thesis disputing the Holocaust – is in the spotlight again, this time for allegedly displaying anti-Semitic cartoons.

The cartoons, reportedly seen on the office door of Professor Thomas Fudge by a UNE student, depicting demeaning Jewish stereotypes, have been denounced by the B’nai B’rith Anti-Defamation Commission (ADC).

The ADC identified the cartoons on Fudge’s door as the work of Carlos Latuff, who was awarded second prize in 2006 in the Iranian Holocaust cartoon competition.

In one cartoon, a Jewish caricature exclaims, “Anti-Semitism! Anti-Semitism!” to a figure holding a placard with the words, “Free Palestine! End Occupation!” In another, an angry Jewish character, learning of a pro-Palestine rally, rushes to break a fire extinguisher box containing a megaphone, beneath an inscription, “In case of increasing of world support to Palestine, break the glass and shout anti-Semitism”.