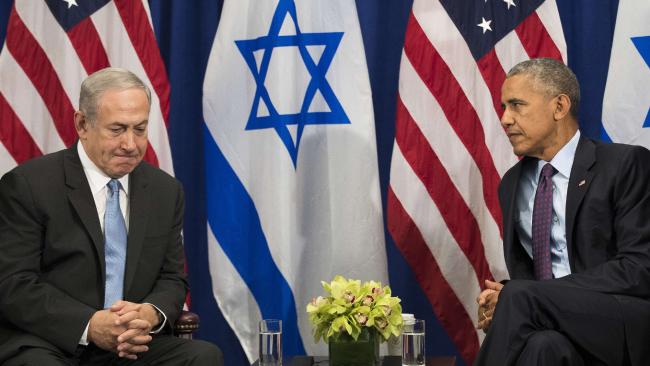 US President Barack Obama and Israeli Prime Minister Benjamin Netanyahu have capped years of frayed ties with a meeting that was intended to highlight a $US38 billion ($50bn) military aid agreement between the two allies.

Both leaders yesterday described the bond between the US and Israel as unbreakable, but the talks on the sidelines of the UN General Assembly were overshadowed by a new spate of Israeli­-Palestinian violence.

Hours before Mr Obama and Mr Netanyahu met, Israeli security forces shot and wounded a Palestinian teenager after she refused to stop at a checkpoint between the West Bank and Israel. It marked the sixth straight day of Israeli-Palestinian violence.

Mr Obama addressed the ­recent strife at the start of the meeting with Mr Netanyahu, saying “our hearts go out to those who have been injured, both ­Israeli and Palestinian”. He also raised US concerns about Israeli settlements, a sore spot between the two leaders.

Read the article in The Australian Business Review (from The Wall Street Journal).