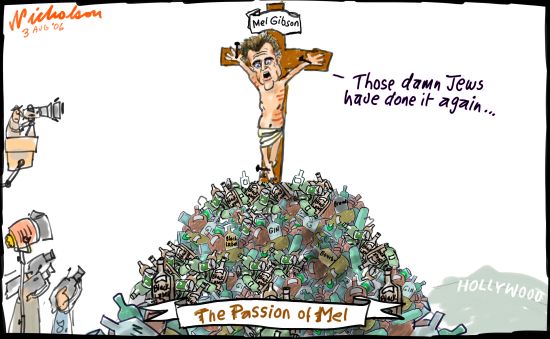 I’m Jewish, and I’m not ready for a Mel Gibson comeback

It’s been over a decade since Mel Gibson was arrested in Malibu, California for a DUI. While being arrested, he shouted at the officer, “f*****g Jews… the Jews are responsible for all the wars in the world. Are you a Jew?”

After accusations of anti-Semitism were hurled at him for mega-blockbuster “The Passion of the Christ,” this one moment badly damaged the career of one of Hollywood’s biggest stars. A few years later, in July 2010, leaked tapes of a fight between Gibson and then-girlfriend Oksana Grigorieva further demonstrated both his rage and bigotry. Since then, Mel Gibson had become a pariah, with many who once worked with him saying that he was blacklisted from Hollywood.

Now, Gibson is attempting a comeback.

Read the article by Ian Phillips in the Business Insider Australia.