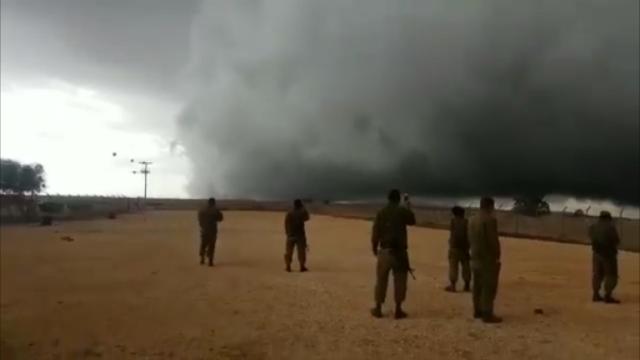 A massive cloud of dust and rain has appeared like a barrier on the border of Israel and Syria invoking biblical belief the storm was sent by God to shield the region from ISIS.

The massive storm stretched for kilometres across the border on December 1 with witnesses claiming it was “unable” to enter Israel’s Golan Heights region due to divine intervention.

People have taken to social media citing passages from the Bible and various proclamations that the storm was sent to protect the civilians and soldiers from the jihadi terror group.

Despite billowing wind bolstering the storm’s approach the massive cloud did not cross the border.

Users have taken to Facebook to share their opinions of the weather phenomenon. “The Creator of the universe Lord save Israel,” one user wrote.

“Awesome. God’s goodness upon you,” wrote another.

Watch the video at 9news.com.au.