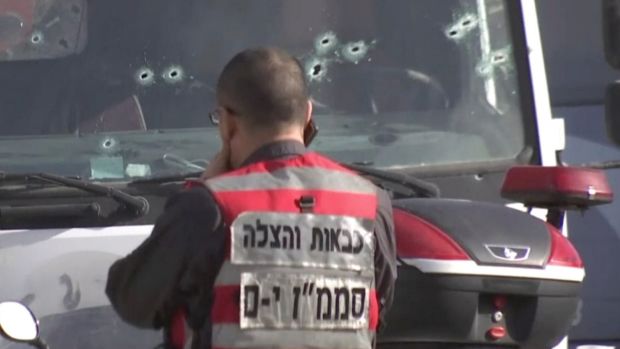 Jerusalem:  A Palestinian driver intentionally rammed his truck into a group of Israeli soldiers on Sunday, killing four and wounding a dozen on a picture-postcard promenade overlooking Jerusalem’s Old City and a park called the “Peace Forest.”

The dead – all 20 years old – and the wounded were part of a large group of officer cadets who were getting an educational tour.

Israeli officials quickly labelled the truck-ramming a terrorist attack and said the driver was from a nearby East Jerusalem suburb.

The Islamist militant group Hamas, which controls the Gaza Strip, applauded the “heroic operation” but did not take responsibility for it.

Prime Minister Benjamin Netanyahu, visiting the scene about two hours after the attack, said the assailant showed “all the signs he was a supporter of the Islamic State” militant group.

It was one of the deadliest attacks in more than 18 months of stabbings, shootings and vehicular assaults by Palestinians. It comes just a week before a planned conference in Paris that seeks to push the Israelis and Palestinians to restart their stalled peace talks.

Read the full article by William Booth at The Sydney Morning Herald.