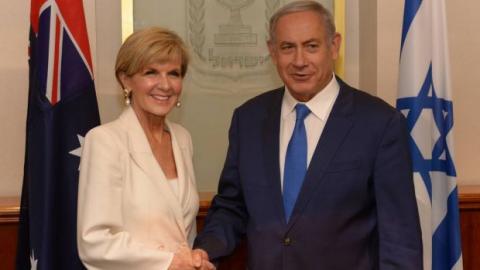 Foreign minister Julie Bishop was quick to reiterate the Australian government’s firm support for Israel and distance it from the December 24 vote on UN Security Council resolution 2334 reaffirming the illegality of Israeli settlements on occupied Palestinian territories.

The resolution was passed by the Security Council, with the United States abstaining rather than vetoing the vote, as it has traditionally done with resolutions that have criticised Israel.

Former Prime Minister Tony Abbott, who participated in the recent Australia-UK-Israel Leadership Dialogue trip to Israel, followed this up with his suggestion that Australia’s embassy be relocated to Jerusalem. The historic city has been at the heart of a decades-long dispute between Israel and Palestine, with both claiming it as its capital.

Bishop has said that moving the embassy from where it is in Tel Aviv is not on the government’s agenda.

It seems Abbott’s primary motivation for suggesting the move was to be seen as concurring with the incoming Donald Trump administration, which has floated moving the US embassy to Jerusalem. Following the vote, Trump expressed his strong opposition to the UN Security Council resolution and support for Israel.