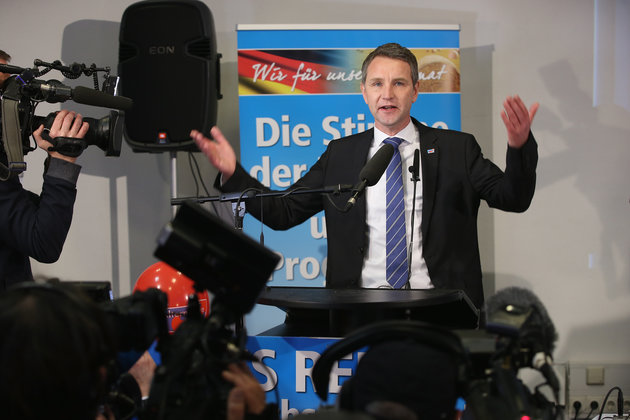 WITTENBERG, GERMANY - MARCH 13: Bjoern Hocke (L), head of the Alternative fuer Deutschland political party (Alternative for Germany, AfD) in the state of Thuringia, speaks to supporters and the media after strong initial exit poll results in Saxony-Anhalt state elections that will likely give the AfD a second-place finish on March 13, 2016 in Magdeburg, Germany. State elections taking place today in three German states: Rhineland-Palatinate, Saxony-Anhalt and Baden-Wuerttemberg, are a crucial test-case for German Chancellor and Chairwoman of the German Christian Democrats (CDU) Angela Merkel, who has come under increasing pressure over her liberal immigration policy towards migrants and refugees. The populist Alternative fuer Deutschland (Alternative for Germany, AfD), with campaign rhetoric aimed at Germans who are uneasy with so many newcomers, has solid polling numbers and will almost certainly win seats in all three state parliaments. (Photo by Sean Gallup/Getty Images)

Bjoern Hoecke, a leader in the populist Alternative for Germany party, called a Berlin memorial “a monument of shame.”

Germans condemned a leading figure in the far-right Alternative for Germany party on Wednesday after he described Berlin’s Holocaust memorial as a “monument of shame” and questioned the nation’s continued atonement for its Nazi past.

The AfD’s Bjoern Hoecke, addressing youth supporters in a Dresden beer hall Tuesday night, called for Germany to do a “180-degree turnaround in our policy of memory.” Hoecke said Germany was being forced to accept defeat and guilt for Nazism, rather than build a positive culture that includes it with other aspects of German history.

“Our mental state continues to be that of a totally defeated people. We Germans are the only people in the world that have planted a monument of shame in the heart of their capital,” Hoecke said, referring to the Memorial to the Murdered Jews of Europe.

German politicians and Jewish groups quickly condemned Hoecke’s remarks as anti-Semitic and unacceptable. Socialist Left Party member Diether Dehm said he would report the speech for inciting hatred. Vice Chancellor Sigmar Gabriel denounced the remarks, saying “never, never must we allow ourselves to let the demagogy of a Bjeorn Hoecke to go unchallenged.”

Read the full article by Nick Robins-Early at The Huffington Post.