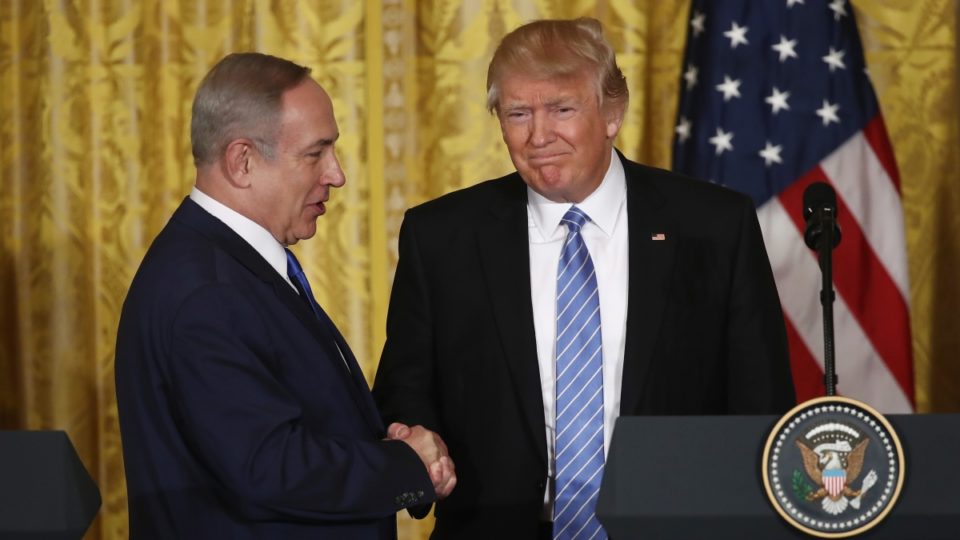 Two state, One State, whatever … Trump re–writes US foreign policy on Israel

US President Donald Trump has casually tossed out years of American foreign policy in a White House press conference with the Israeli Prime Minister, Benjamin Netanyahu.

Asked about his preference for a Middle East peace solution he told reporters, “I can live with either”.

“I’m looking at (the) Two State (solution) and One State and I’m happy with the one they like the best,’ he said.

However he did mildly admonish Mr Netanyahu in answer to a question over expanding Jewish settlements in the West Bank, turning to the Prime Minister directly and telling him, “I would like to see you hold back on the settlements for a little bit”.

More than 600,000 Jews live in some 140 settlements built since Israel’s 1967 occupation of the West Bank and East Jerusalem on land Palestinians claim for a future state.

The settlements are considered illegal under international law, though Israel disputes this.

Mr Trump also said Palestinians had to “get rid of some of the hate they are taught from a very young age”, and needed to acknowledge Israel if there was ever to be a solution to the Middle East issue.

“Both nations will have to make compromises,” he said.

Mr Trump answered a question over a controversial potential move of the US embassy in Israel from Tel Aviv to Jerusalem, saying he would “love to see the move” and would be looking at it very strongly.

Mr Netanyahu said the two pre–requisites for peace were that Palestinians must recognised the Jewish state, and that Israel must retain control over the whole region.

He also said that under Mr Trump’s leadership, “I believe we can reverse the rising tide of militant Islamism”.

Mr Netanyahu also made reference to the United Nations’ recent resolution condemning Israeli settlements, with a “forthright call to make sure Israel is treated fairly in international forums”.

Read the full article by Alexia Russell at The New Daily.