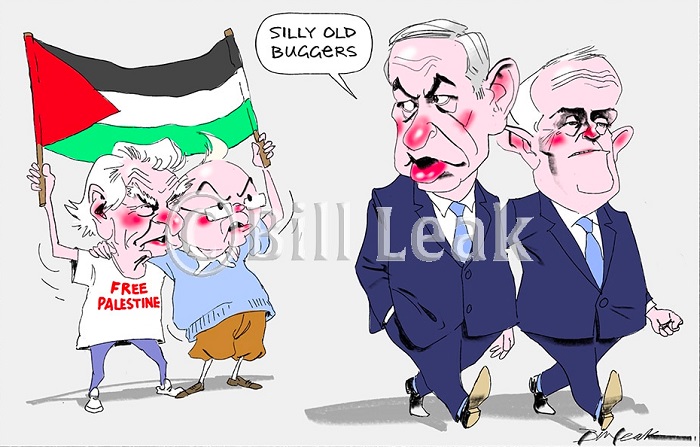 Jmedia Manager
Print
February 25, 2017 367
What a caterwauling coven of craven zeitgeist whisperers they are — Bob Hawke, Kevin Rudd and Gareth Evans — calling for Australia to formally recognise a Palestinian state, the three of them like the witches of Macbeth intoning sterile incantations; in this case not with the purpose of affecting reality but rather to signal once again their sublime and ineffable virtue.
Using the visit of Israeli Prime Minister Benjamin Netanyahu to gain themselves attention, they indicate only the deterioration of Labor’s foreign affairs culture, though Bill Shorten and Penny Wong sensibly rejected their calls.
Hawke and Rudd, particularly, are always keen to lavish themselves with praise and moral credentials they simply do not possess. Thus Hawke in his Australian Financial Review piece described himself as a well-known supporter of Israel. What a lame, many-of-my-best-friends-are-black sort of credential this is. Hawke hasn’t been a supporter of Israel in any meaningful sense for 30 years.
His piece was full of weird basic errors of fact. He claims the Netanyahu government has approved thousands of new West Bank settlements. In fact it has approved just one. Apart from that one settlement, the individual homes and apartments it has authorised do not even keep pace with natural increase within the settlement blocs and do not extend their territory, which in total accounts for 3 to 4 per cent of the West Bank area.
Rudd was even more fatuous and hypocritical, claiming Netanyahu had repeatedly torpedoed peace — without giving a syllable’s attention to times the Palestinian leadership has rejected full-blown peace offers along the lines of a state in the West Bank and Gaza and compensating land swaps from Israel. Then there was Gareth Evans, the poor man’s Rudd, claiming the Arabs could provide for Israel’s security. What planet does this man live on? Most Arab states cannot provide for their own security, much less anyone else’s.
Let’s pause for a second to consider the moral courage of these Antipodean Metternichs, putting the Middle East to rights.
Read the article by Greg Sheridan in The Australian (subscription required).