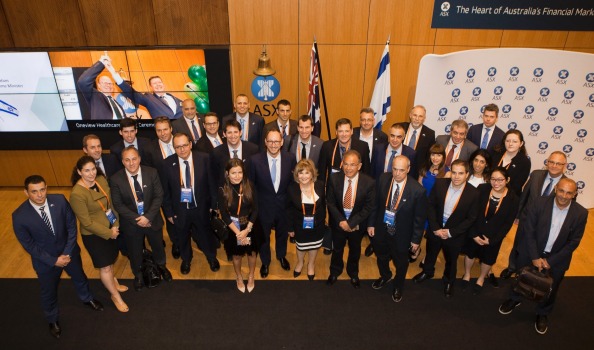 A flood of up to 15 Israeli technology companies are poised to list on the Australian Securities Exchange this year, after a tech-heavy delegation used Prime Minister Benjamin Netanyahu’s visit last week to lay the groundwork for local IPOs.

Israel Trade Commissioner Ethy Levy told The Australian Financial Review the number of Israeli firms on the local exchange would more than double in the coming months and that of the 22 companies that took part in the recent delegation, at least five will soon appear on the ASX.

“From what I know, there’s about 15 [Israeli] companies in different stages of the listing pipeline. Some are exploring their options and then there are some already actively in the process of listing here,” Ms Levy said.

She said Australia is sold to Israeli startups as the best market for their technology, with a highlight put on the relatively advanced rollout of 4G and now 5G mobile networks.

Australia is also seen as a good size market for earlier stage companies, which can find the vast challenge of the US too daunting and expensive, and it has a growing reputation as an early adopter of technology, with good engineering capabilities.

“Rather than jumping directly into the cold water of the US with more competition, it’s a more strategic move to come to Australia and achieve good penetration in the market,” Ms Levy said.

There are already 13 Israeli companies listed on the ASX, eight of which listed in the last 12 months.

Next month high-tech telecommunications startup Mobilicom will be the 14th Israeli company on the exchange. It was originally slated to be a backdoor listing, but ultimately changed course and decided to list via an initial public offering.

As well as Mobilicom, Ms Levy said clean energy company Eco Wave Power, which was on the recent delegations, is intending to list on the ASX within the next 12 months. When it lists it will be a competitor to Perth-based Carnegie Wave Energy.

Two weeks ago the ASX’s general manager of listings, issuer services and investment products, Max Cunningham, went on the ASX’s first trip to Israel to discuss listings and another is now slated for April.

Read the full article by Yolanda Redrup at the Australian Financial Review.