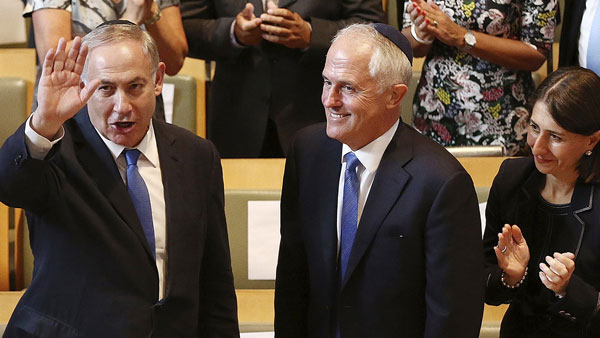 “Bibi” and the uglies

It was Benjamin Netanyahu’s first official visit to Australia and the first by a serving Israeli prime minister since the foundation of that country in 1948. In these days of increasingly frequent official visits and showing of the diplomatic flag, such an occasion was bound to happen at some point. But why now, exactly? The Israeli PM claimed his inaugural tour had been “wonderful”. “This has been a wonderful visit here. You people are amazing,” Netanyahu told Foreign Minister Julie Bishop before they headed into secret bilateral talks.

Julie Bishop had just returned from her own whirlwind tour of the UK and the US, where she met leaders from the Trump Administration. For what seems like the millionth time, she committed the Australian people to the war-fighting US Alliance and support for any actions the US might like to take in the South China Sea. She was already on record backing Trump’s all but universally deplored “strong immigration and border protection policies”.

Netanyahu’s visit attracted protests by people outraged at Israel’s continued denial of the rights of the Palestinian people, including to a sovereign state within secure borders. The official reception, however, couldn’t have been warmer. Speaking in the Sydney Central Synagogue, Australian PM Malcolm Turnbull painted the official Zionist picture of Israel as a peace-loving, reasonable nation surrounded by irrational and hostile neighbours.

He took the theme up again in a piece for the Australian last week. “Our peoples are bound together first and foremost by the values we share – a mutual commitment to freedom, democracy and the rule of law,” the PM wrote. He made the claim about respect for the rule of law in the face of the evidence he quoted in the same column. “In a speech to the UN General Assembly in 2015, Prime Minister Netanyahu pointed out that in the preceding 12 months, the General Assembly had adopted 20 resolutions critical of Israel, compared to just one in response to the war in Syria …,” Turnbull lamented.

According to the Australian PM, the world has it all wrong and Israel is being subjected to an campaign of vilification for no reason at all. Turnbull made it clear Australia will cleave to its uncritical line and continue to ignore international protests such as the UN Security Council’s recent condemnation of Israeli endorsement of settlements on Palestinian land. The Israeli parliament has declared 4,000 Jewish settlers’ homes “legal” retroactively in a move prompting almost universal condemnation.

Read the full article by Bob Briton at The Guardian.