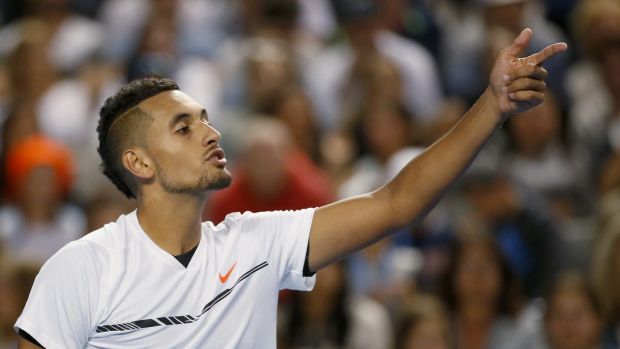 A group of four tennis fans, who claim they were directly targeted by Nick Kyrgios at the Mexico Open, say they felt threatened by the Australian tennis star and have demanded an apology.

Kyrgios was involved in a heated exchange with Dudi Sela after appearing to clash with his Israeli opponent’s supporters, with vision emerging of Kyrgios telling them to “shut the f— up”.

That happened after Kyrgios lost the first set 6-3 to Sela, but he recovered to win the next two sets and advance to the next round..

Young Jewish tennis fan Isaac Cherem, who lives in Mexico, was attending the match with three of his friends, all of whom were supporting Sela.

“It wasn’t like we were talking in the points or when Kyrgios was serving; it was only cheering in between the points,” he told Fairfax Media.

“We were maybe three metres away from him, if we whispered, he could hear us.

“He [my friend] whispered and then Kyrgios said shut the f— up.”

Cherem, 19, who is a tennis fanatic and has attended the Mexico Open for the last nine years, says he and his friends were taken aback when Kyrgios abused them.

“At first we were a little bit scared because he’s a big dude,” Cherem said.

“He’s a really, really good player, but he just doesn’t have the head for the game.”

The Kyrgios incident comes on the same day that the application of countryman Bernard Tomic came under scrutiny after the Australian pulled out of his match at the same tournament, citing “unbearable heat”. Tomic later returned to play a doubles match.

Read the full article by Sam McClure at The Sydney Morning Herald.