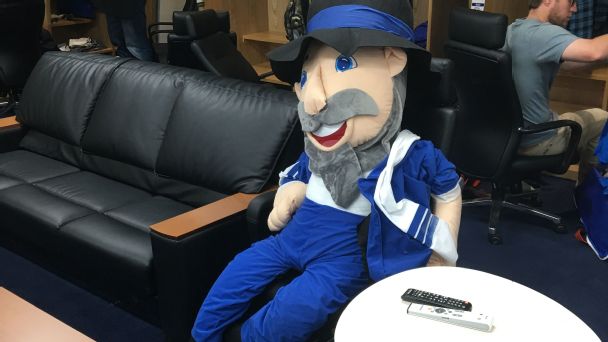 Team Israel — and its mascot, Mensch on a Bench — is the Jamaican bobsled team of the WBC

If Ty Kelly is searching for material for his next screenplay, he doesn’t have to look very far.

According to his W-2, Kelly is a professional baseball player. But what Uncle Sam doesn’t know — at least not yet — is that the 28-year-old infielder is an up-and-coming screenwriter. That is, when he’s not busy moonlighting as the starting shortstop for Team Israel in this year’s World Baseball Classic.

If you’re not familiar with Team Israel, they’re essentially the Mighty Ducks, Hickory High, and the Jamaican bobsled team all rolled into one. In other words, they’re straight out of Central Casting for the role of “Underdog Team That Stands Absolutely No Chance of Winning But Somehow Goes On To Win It All.” Except for the part that so far, they’ve won nothing. Well, almost nothing.

This past September in Brooklyn, Israel penned the opening chapter of its Cinderella story by finishing first in a four-team qualifying tournament to earn its inaugural trip to the WBC. Although the competition wasn’t exactly stiff (Great Britain, Brazil, Pakistan), they’ll take it — especially after falling in extra innings to Spain in the deciding game of the 2012 qualifier. The losing pitcher in that contest? Reliever Josh Zeid, who, in true fairy tale fashion, just so happened to pick up the W in Israel’s clinching 2016 win over Great Britain.

Six months later, skipper Jerry Weinstein’s squad (raise your hand if you’ve ever heard of him) is arguably the biggest underdog in the history of the event.

Of the sixteen nations represented in this year’s WBC, Israel was the very last one in and is the only participant not currently among the top 20 in the world rankings (they’re number 41, just behind baseball powerhouses like Poland and the Ukraine). As if that weren’t enough, they had to travel halfway across the world (with their life-size “Mensch on a Bench” mascot), where they’re the lowest seed in a four-team pool that features host country South Korea (2009 runners-up) and 2013 final-four squad Netherlands. Of the 28 players who made the trip to Seoul, not a single one of them is presently listed on a major league 40-man roster. No wonder bookmaker Bovada has Team Israel listed at 200-to-1 odds to win the whole thing, the longest shot in the tourney and 100 times as unlikely as 2-to-1 favorite USA.

Read the full article by Eddie Matz at ESPN.