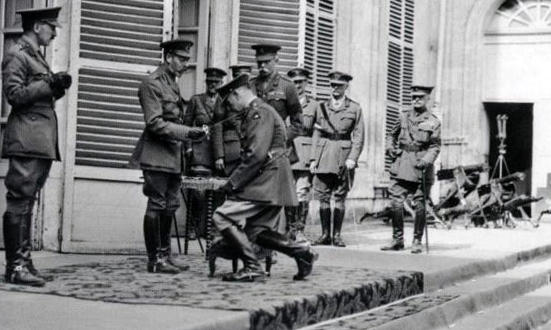 Monash led the Australian Corps and Allied forces in the First World War, inflicting pivotal defeats on the Germans.

In 1918 in France, Monash was knighted by King George V, the first soldier in 200 years to receive the honour on the battlefield from a British monarch.

“A very brave soldier at Gallipoli and during the Western Front campaign, he commanded five Australian divisions and was the general who first led Australians and Americans together into battle at Hamel.”

A reservist soldier, Monash held the rank of militia colonel at the start of the war.

Despite delivering crushing blows against the Germans at Hamel, Amien and the Hindenburg Line, he was not promoted above the rank of lieutenant general during the war.

Tim Fischer, former deputy prime minister in the Howard government, has been leading the campaign, known as the Jerilderie Proposition, to right the wrong that almost sidelined Monash in the final fight against the Germans.

“He was a giant of a man. I think the country did the wrong thing by him – not quite as bad as the French Dreyfus affair but not far off it, and the sooner he’s promoted to field marshal, the better,” Mr Fischer said.

“The actual procedure is not that difficult, it’s a matter for the prime minister, and I’ve raised it with him.”

Read the full article by Stefan Armbruster at SBS.