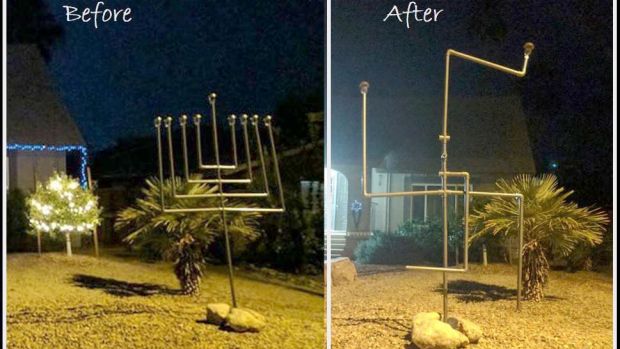 Arizona police have arrested four suspects in an apparently anti-Semitic act of vandalism that made headlines across the US in December.

The Chandler Police Department said that a 19-year-old man and three boys were responsible for dismantling a Jewish family’s PVC pipe menorah (a sacred, branched candlestick) and turning it into a swastika.

The police said Clive Jamar Wilson, 19, will face charges of criminal trespass and aggravated criminal damage for the destruction of the family’s yard decoration.

Three boys, who were not named because they are under 18, face the same charges in juvenile court.

Kevin Quinn, a police spokesman, said authorities are investigating and have not determined whether to label the actions a hate crime.

Read the full article by Julie Zauzmer at The Sydney Morning Herald.