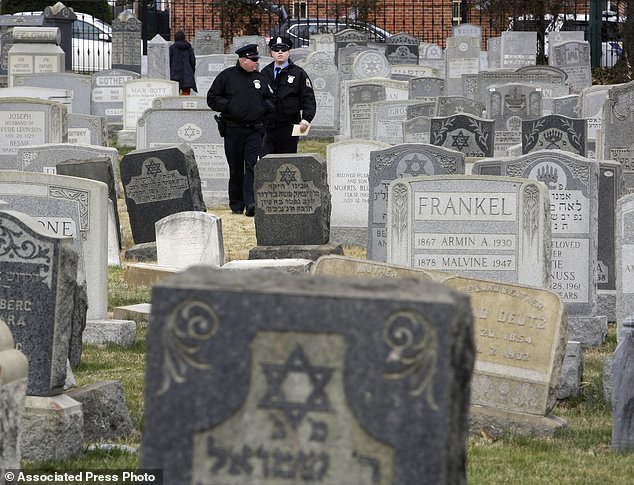 Philadelphia Police walk through Mount Carmel Cemetery, Monday, Feb. 27, 2017, in Philadelphia. More than 100 headstones have been vandalized at the Jewish cemetery in Philadelphia, damage discovered less than a week after similar vandalism in Missouri, authorities said. (AP Photo/Jacqueline Larma)

This February, more than 100 gravestones were vandalized at the Chesed Shel Emeth Society Cemetery outside of St. Louis, Missouri and at the Jewish Mount Carmel Cemetery in Philadelphia.

The Anti-Defamation League (ADL) has called anti-Semitism in the U.S. a “very serious concern.” An ADL task force confirmed that 800 journalists in the U.S. have been targeted with more than 19,000 anti-Semitic tweets. The organization also reported an upsurge in anti-Semitism on U.S. college campuses.

Most disconcerting, however, is the ADL’s admission that, although this increase in anti-Semitism is troubling, “it is essential to recognize that, for both positive and negative reasons – we are not alone.” In the 10 days following the presidential election in 2016, nearly 900 hate-motivated incidents were reported, and many on college campuses. Many of these incidents targeted Muslims, people of color and immigrants as well as Jews.

I am a Jewish studies scholar. Research shows that this outpouring of anti-immigrant and anti-Semitic sentiment is reminiscent in many ways of the political climate during the years between the first and second world wars in the U.S. – known as the interwar period.

Read the full article by Ingrid Anderson at The Conversation.