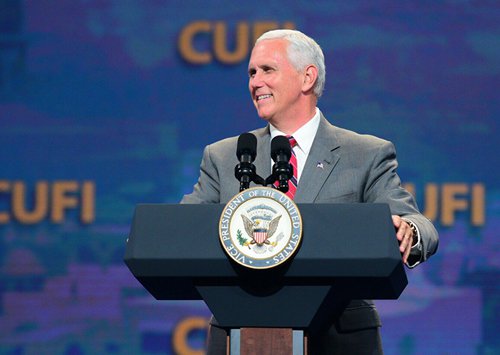 US Vice President Mike Pence told evangelical supporters of Israel that God had a hand in creating the state of Israel and that his support for the country is rooted in his faith.

He also promised that the Trump administration will move the US Embassy from Tel Aviv to Jerusalem.

“Indeed, though Israel was built by human hands it is impossible not to sense that just beneath its history lies the hand of heaven,” Mr Pence told the annual summit of Christians United for Israel on Monday.

The group, founded by San Antonio pastor John Hagee, bills itself as the largest pro-Israel organisation in the US. It is composed largely of evangelicals and met in Washington this week in part to celebrate a new administration its members consider far friendlier toward Israel than its predecessor.

Many evangelicals look upon the founding of the modern state of Israel in 1948 and the “ingathering” of the Jews as a necessary step toward the end times, when they believe Jews will either accept Christianity or face eternal damnation.

Read the full article by Lauren Markoe at Sight Magazine.