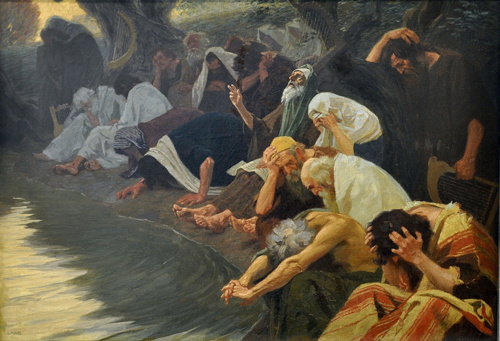 At sundown on 31st July, Jews around the world will observe Tisha B’av, the most somber of Jewish holidays. It commemorates the destruction of the two temples in Jerusalem, first by the Babylonians and then, almost seven centuries later, in 70AD, by the Romans.

Jews will remember these two historic calamities along with many others, including their slaughter during the First Crusade; the expulsions from England, France and Spain; and the Holocaust.

The pattern of forced migration was set by the Babylonian conquest of 587-586 B.C., when the elite of Judah were marched to Babylon and the temple destroyed. Like the story of Moses and the Exodus from Egypt, which happened several centuries earlier, the Babylonian exile dwells at the heart of Judaism. The trauma served as a crucible, forcing the Israelites to rethink their relationship to Yahweh, reassess their standing as a chosen people and rewrite their history.

Psalm 137, the subject of my most recent book, Song of Exile, is a 2,500-year-old Hebrew poem that deals with the exile that will be remembered on Tisha B’av. It has long served as an uplifting historical analogy for a variety of oppressed and subjugated groups, including African-Americans.