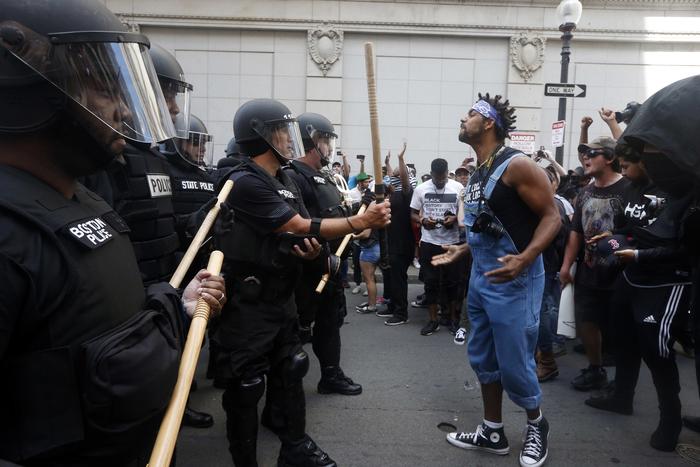 A counterprotester stands in front of police near a "Free Speech" rally staged by conservative activists, Saturday, Aug. 19, 2017, in Boston. (AP Photo/Michael Dwyer)

Thousands of anti-racism demonstrators flooded the streets of Boston Saturday, dwarfing a gathering of white nationalists in the city and triggering scuffles with police but avoiding the serious violence that marred a similar event a week earlier in Virginia.

A so-called “free speech” rally by far-right groups had been scheduled to run until 2 pm (1800 GMT), but a half-hour before that police escorted its participants — whose numbers appeared to be in the dozens — to safety past a throng of anti-racism protesters.

Officials estimated turnout of about 40,000 demonstrators. Authorities said there were 27 arrests, mostly for assault and battery against the police, and disorderly conduct.

Aerial photos showed counter-protesters filling one of Boston’s main streets for several blocks, in a huge outpouring of anti-racist sentiment in this strongly Democratic northeastern city.

While Boston saw no repeat of the violence that erupted last weekend in Charlottesville, Virginia, isolated scuffles between police and protesters prompted President Donald Trump to weigh in, with a tweet intoning against the “many anti-police agitators in Boston.”

Watch and read the report from SBS TV news.