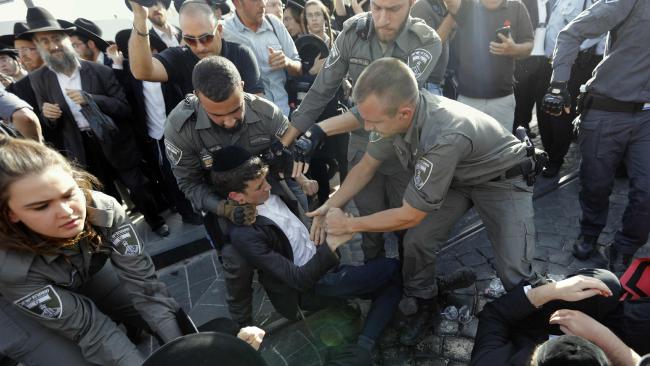 Several thousand ultra-Orthodox Jews have blocked an intersection in central Jerusalem to protest against ­efforts to force them to enlist in the Israeli military like their secular compatriots.

There were simultaneous disturbances in other parts of the city on Thursday, including the ultra-Orthodox Mea Shearim neighbourhood, where protesters blocked streets and set fire to rubbish bins, using them as flaming barricades.

They later said they had ­arrested 120 demonstrators who were “involved in disturbances and blocked roads and major junctions”.

A series of such protests in recent weeks has been spurred by occasional arrests of ultra-Orthodox young men accused of dodging military service.

On Thursday, several thousand men and boys wearing traditional black suits and hats took to the streets of Jerusalem and blocked a key intersection.

Read the article in the Weekend Australian (AFP).