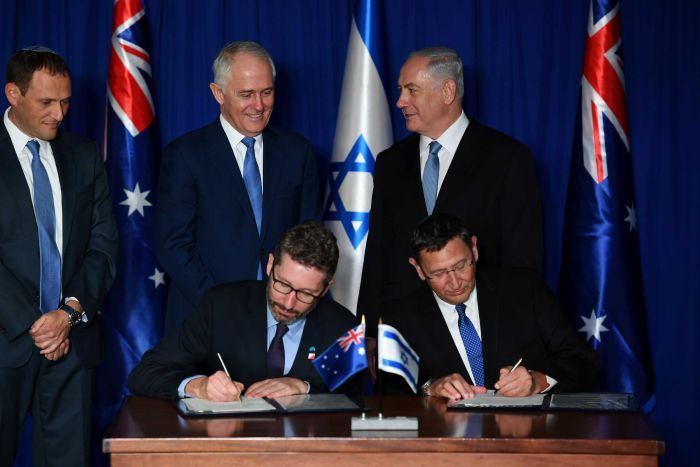 Prime Minister Malcolm Turnbull has witnessed the signing of a defence industry cooperation memorandum with Israel after meeting with Prime Minister Benjamin Netanyahu in Jerusalem.

After a warm ceremonial welcome, the two leaders discussed the shared threat of Islamic terrorism and the need to tighten cyber security as well as increasing cooperation to boost investment between the two countries.

However, Mr Turnbull said the two leaders had a “different perspective” when it came to the Iran nuclear deal.

“We absolutely understand Israel’s very real concerns and anxiety about Iran moving to a nuclear weapons capability, but we are not persuaded that moving away from the agreement would be beneficial in terms of preventing that type of proliferation,” he said.

Mr Turnbull is visiting Israel for the 100th anniversary of the battle of Beersheba but his arrival was delayed due to the fallout from the High Court’s citizenship ruling.

Mr Turnbull said the relationship between the two countries was strong on both a governmental and personal level.

Read the full article by Philip Williams and Sophie McNeill at ABC News.