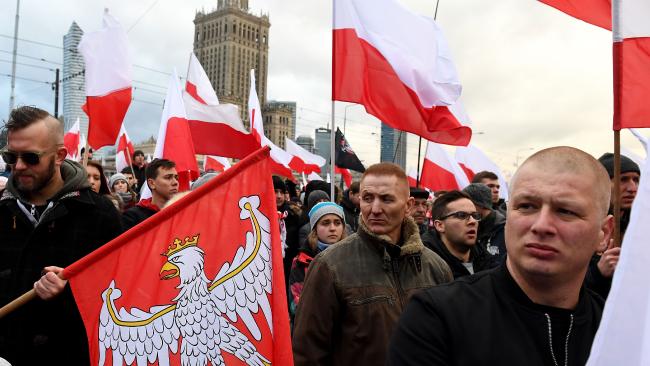 Tens of thousands of Poles marched across downtown Warsaw on Saturday, in an independence-day procession organised by a nationalist youth movement that seeks an ethnically pure Poland with fewer Jews or Muslims.

The largely young crowd shot off Roman candles and many chanted “fatherland,” carrying banners that read “White Europe,” “Europe Will Be White” and “Clean Blood.” Some of the marchers flew in from Hungary, Slovakia and Spain and waved flags and symbols that those countries used during their wartime collaboration with Nazi Germany.

A number of people in the crowd said they didn’t belong to any neo-fascist or racist organisation but didn’t see a problem with the overall tone of what has become Poland’s biggest independence day event.

“There are of course nationalists and fascists at this march,” said Mateusz, a 27-year-old wrapped in a Polish flag, “I’m fine with it. I’m just happy to be here.” …

This year, the group said it was adopting a new slogan, a quote from a July speech here by President Donald Trump: “We want God.” …

The fear that Poland is under siege by distant elites has captured the imagination of some here, as has the worry that hordes of immigrants could soon pour over the border. Government-controlled media broadcasts near-nightly reports on crimes committed by Muslims in Europe. On Saturday, Polish state television called the procession a “great march of patriots.

Read the article in The Australian (subscription required).