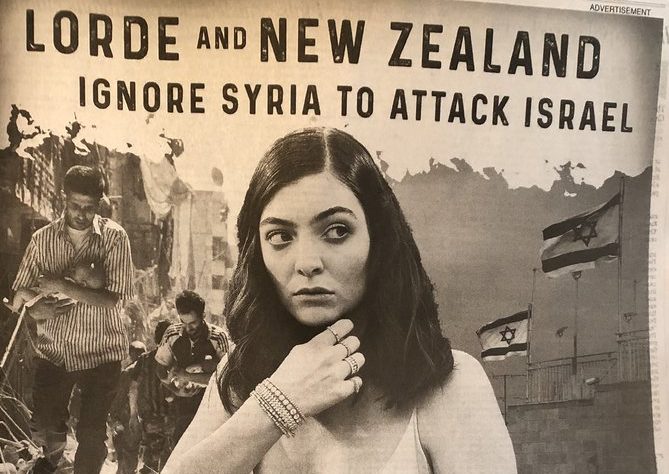 Lorde Slammed As A ‘Bigot’ After Cancelling Controversial Israel Show

ICYMI: the kiwi alt-pop queen pulled the plug on the gig she had planned for the hotbed of religious conflict following a backlash from some fans, announcing that after “lots of discussions” on the matter she’d come to the conclusion that axing the event was the “right decision”.

But now she’s getting slammed for the move, with the massive spread in the Post calling her a “bigot” and a “Jew-hater”.

As the ABC reports, the hot piece of paid propaganda in the December 31st edition of the paper is headlined “Lorde and New Zealand ignore Syria to attack Israel” and rails against the ‘Green Light’ singer for cancelling her show in the country’s capital Tel Aviv, while also attacking NZ for voting (alongside over 100 other countries, just FYI) in favour of a United Nations resolution, calling for the US to drop its recognition of Jerusalem as Israel’s capital.

“Tragically, New Zealand’s growing prejudice against the Jewish State seems to be trickling down to its youth,” the ad reads.

“Let’s boycott the boycotters and tell Lorde and her fellow bigots that Jew-hatred has no place in the twenty-first century.”