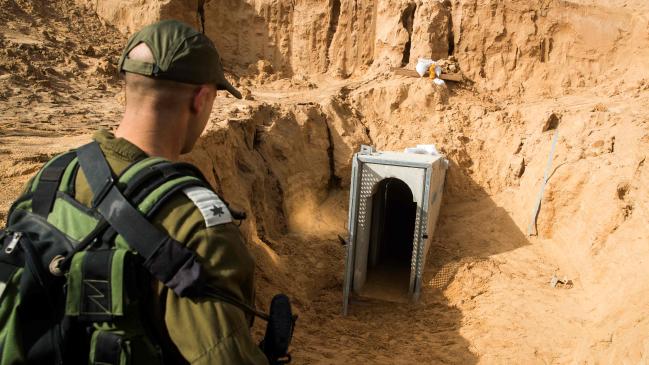 Massive earthworks and mounds of sandy soil line the Israel-Gaza border as the Israeli military forges ahead with an ­ambitious subterranean barrier to detect and prevent attack tunnels from reaching southern Israel from the Palestinian enclave.

Israeli military officials have touted the secretive project as a major deterrent against what ­Israel has seen as a strategic threat since the last war against Hamas exposed the extent of the tunnels.

Israel has made uncovering the tunnels from Gaza a priority and in recent months has demolished at least three through a combination of intelligence, infantry ­operations and hi-tech sensors.

“The technology really is groundbreaking,” Israeli military spokesman Lieutenant Colonel Jonathan Conricus told journalists on the border with the Gaza Strip. “The message to Hamas is: ‘We now have this system which can detect and destroy terror tunnels that violate Israeli sovereignty.’ ’’

Colonel Conricus said the anti-tunnel barrier “provides a significant challenge for anyone tunnelling below”, without elaborating. Israel and Hamas, the Islamist militant group that has ruled the Gaza Strip since 2007, have fought three wars since 2008. During the most recent conflict in 2014, Hamas militants caught ­Israel off guard several times by attacking through the underground tunnel network.

Read the full article by AP at The Australian (subscriber only).