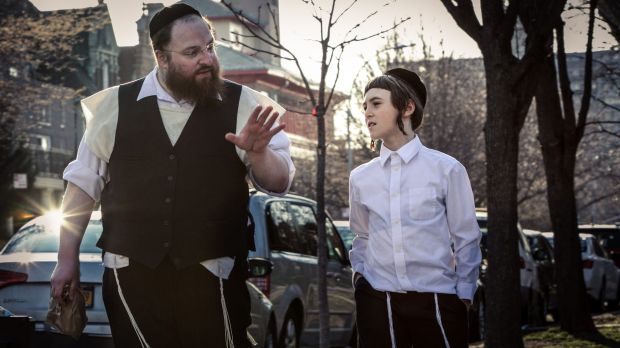 Josh Weinstein and Menashe Lustig on their new film Menashe

Walk around Borough Park, a neighbourhood of Brooklyn, New York; practically everyone you see is a Hasidic Jew. The women wear wigs or headscarves; the men wear high felt hats and black overcoats. “One thing I loved about it was that it looked like New York City, but not like a New York City you’ve ever seen before,” says Josh Weinstein, whose fascinating film Menashe is based on the life of its Orthodox star, Menashe Lustig. “But the other thing is that it has lots of different types of religious Jews. This is really ‘Inside Baseball’, but there are over 40 Hasidic groups. Their hats are a little different, their jackets are a little different, their hair is a little different. You wouldn’t know the difference, but Menashe does.”

Lustig is a strictly observant member of the Skver sect, which has its origins in Chernobyl; the Skverer survivors of the Holocaust came to the US after the Second World War, bought land in upstate New York and established a town called New Square. “It’s like a Ukrainian village,” says Menashe, who is dressed entirely traditionally, the tassels of his tzitzit trailing below his vest. He says he learned English living in London. Actually, he speaks a frequently baffling mash of Yiddish and English words packed into German-style sentences. Weinstein, who doesn’t speak any Yiddish, auditioned and directed his actors – who are mostly amateurs – through a translator.

Read the full article by Stephanie Bunbury at the Sydney Morning Herald.