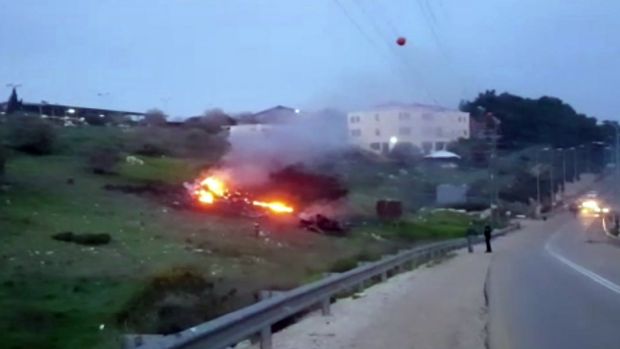 The United States has backed Israel for its strikes on what the Jewish state called Iranian positions inside Syria, blaming Iran for escalating violence in the war-wracked country.

Israel’s raids came after it intercepted what it said was an Iranian drone entering its airspace from Syria, calling it an “attack.”

“The United States is deeply concerned about today’s escalation of violence over Israel’s border and strongly supports Israel’s sovereign right to defend itself,” State Department spokeswoman Heather Nauert said in a statement.

Following the most serious confrontation between arch foes Israel and Iran since Syria’s civil war began in 2011, Prime Minister Benjamin Netanyahu vowed to prevent Tehran from establishing a threatening military presence in the Arab state.

“Iran’s calculated escalation of threat, and its ambition to project its power and dominance, places all the people of the region — from Yemen to Lebanon — at risk,” Ms Nauert said.

“The US continues to push back on the totality of Iran’s malign activities in the region and calls for an end to Iranian behaviour that threatens peace and stability.”

The confrontation was the first time Israel has publicly acknowledged targeting what it identified as Iranian positions in Syria since the conflict started.

Mr Netanyahu says he has spoken with Russian President Vladimir Putin about the latest developments in the region. Mr Netanyahu says he informed Mr Putin of Israel’s intention to continue defending itself against any aggression and to prevent Iran from establishing a presence “in Syria or anywhere else.” Russia backs the Assad and maintains a large military presence in the country. Mr Netanyahu has met several times with Putin to coordinate military activities in the region.