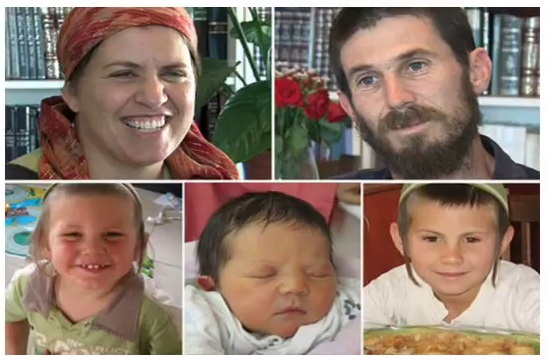 Jmedia Manager
Voices
March 14, 2018 342
Seven years.
It has been seven years since five members of the Fogel family – parents Ehud and Ruth, and three of their six children Yoav 11, Elad 4 and Hadas who was only three months old – were butchered in their home in Itamar while they were sleeping. Baby Hadas was decapitated. It is difficult to even type the words about such an unspeakable horror.
I will always remember the number of years passing since this horrific event because it happened on the Shabbat evening before my wedding in Israel.
The images of the scene that were released on the following day – horrific, blood-soaked beds and walls – shook me to the core. That night I went to the Mikvah, a pre-wedding ritual, and immersed myself in water. This is supposed to be an act of spiritual rebirth, but I could not shake that awful feeling that our moment of pure celebration was taking place at the darkest moment for another family not more than a half hour’s drive away from us.
The two Palestinian murderers, cousins Amjad and Hakim Awad, were captured after a short manhunt, but not before Palestinian media linked to leader Mahmoud Abbas falsely claimed that the murders had been committed by (as it turned out, non-existent) Thai workers. Showing no remorse whatsoever, the murderers were handed down multiple life sentences for their actions.
They were of course, praised by Hamas for their “heroic” act, and one of their mothers even appeared on a Palestinian Authority controlled media to praise her son – the “apple of her eye”, while his aunt described him as a “hero and a legend”.
Read the full article by Emily Gian at the ZFA.