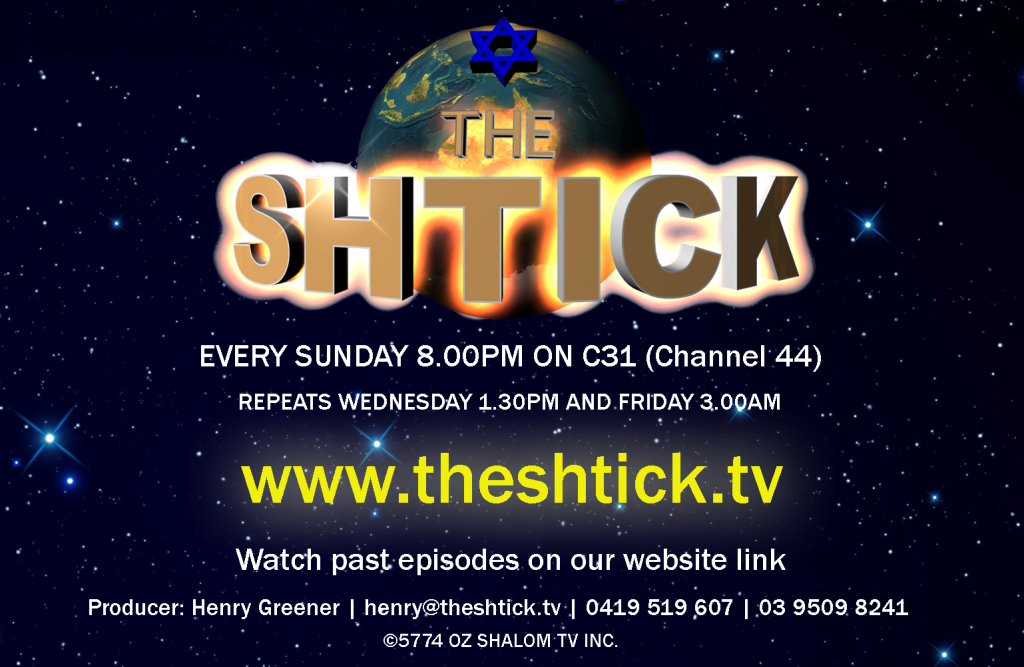 It is a showcase of humour, music, interviews, community events, information and entertainment from within the wider Jewish community and offers an opportunity to have a valuable link to their culture.

As the face of the Jewish community on TV, and online, The Shtick provides an on-screen arena for Jewish talent, a link for youth and an insight into local Jewish life, organisations and personalities.

With a mission to entertain, inform and foster understanding and cohesion within the diverse Jewish and wider multi-cultural Australia, The SHTICK is the only television production to regularly emanate from the Jewish Community of Melbourne, or anywhere in Australia. Colourful elements of comedy, culture and music, woven into the fabric of the show, all serve to draw on the spiritual wealth and depth of Judaism.

Since August 2004, The SHTICK production team, lead by Henry Greener, have put to air over 430 shows, each with fresh and topical content. Now in its 42nd Season on C31, The SHTICK can be viewed anytime, anywhere on YouTube via the link from our website.

Since the introduction of digital broadcast of C31, TV reception and reach have improved significantly. Approximately 30,000 viewers have tuned in to The SHTICK every Sunday at 8pm, Wednesday at 1.30pm and Friday at 3am. The Shtick and We Love The Shtick can be joined on Facebook. We are also on Twitter.

Henry has been to Israel twice in the past 2 years, looking at the latest innovations in TV broadcasting, video streaming and online broadcast. As well, he has recently returned from the 3 week HolyLand Culinary Odyssey with Kosher Chef David Trakhtman, where they documented the world-class colourful, diverse offering of kosher food in Israel, capturing 35 hours of footage to be used on The SHTICK.

We are now back, well in to production for Season 42, as we celebrate 11 years of The SHTICK and 21 years of Channel 31 Melbourne and Geelong, which, contrary to rumours, is still going strong and with all other Australian Community TV Channels, have been given a reprieve to stay on air until at least the end of 2016 !!

The vital importance of The SHTICK as a digital media portal for the community cannot be understated, and its production depends  on continued financial support from Sponsors.

The SHTICK welcomes community participation on camera, behind  the camera, as a viewer, member, or as a sponsor.

Oz Shalom TV Inc. is a not for profit Incorporated Association, and Sponsorship is fully tax deductible.