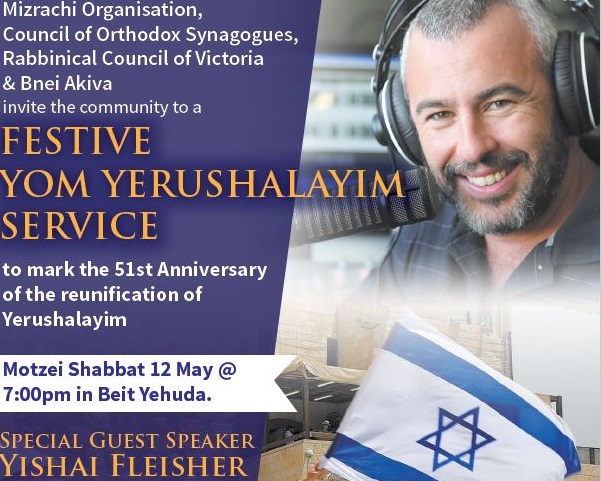 Rabbi Yishai Fleisher is the International Spokesperson for the Jewish community of the Biblical city of Hebron. He has been featured on CNN, Al Jazeera, Fox, Vice, BBC, and more. Yishai is an Israeli broadcaster and a frequent columnist. He holds a JD from Cardozo Law and rabbinic ordination from Kollel Agudat Achim. Yishaiserves as a Paratrooper in the an elite IDF battlefield reserve unit. He speaks Hebrew, English, and Russian, and lives with his family in the hills of Judea.

Yishai Fleisher visit to Australia is sponsored by the Australian Jewish Association https://jewishassociation.org.au  together with the Mizrachi Organisation.

Yishai is the international spokesperson for the Jewish community of Hebron and is also an Israeli broadcaster and a frequent columnist for major news websites, including an oped in the New York Times in February 2017. He is an ordained rabbi and has a law degree, and is also a paratrooper in the IDF reserves.

Yishai Fleischer is outspoken on the failure of the so-called ‘two state solution’ and believes that the Jewish right to the land is derived from our history, religion, international decisions and defensive wars. Jews have lived here for 3,700 years, despite repeated massacres, expulsions and occupations — by the Romans, Arabs, Crusaders and Ottomans. The world recognized the Jewish people’s indigenous existence in this land in the Balfour Declaration of 1917 and the San Remo Accords of 1920.

Here are some preliminary events scheduled, other possible appearances to be advised soon: