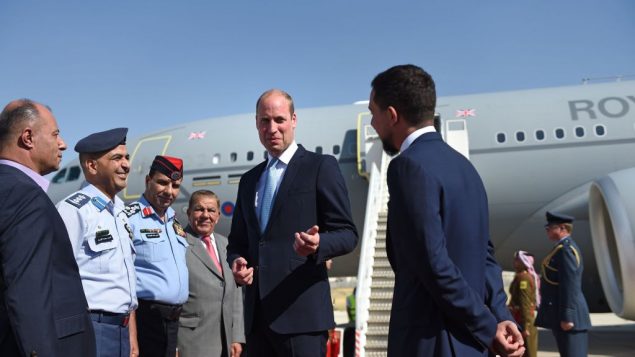 The Duke of Cambridge began his historic trip to the Middle East by bonding with the crown prince of Jordan as they watched England’s World Cup match against Panama.

Crown Prince Hussein recorded the game for the pair to view later as William arrived in Jordan on Sunday just as the second half between England and Panama began.

The duke, who is president of the FA, spent the remainder of the day avoiding the scoreline and swore the travelling media not to tell him.

After he revealed he would be watching the match at the end of the day the duke told the media travelling with him: “On pain of death, please don’t tell me the score.”

William’s five-day visit to the Middle East is hugely symbolic, and will also see him visit Israel and the Occupied Palestinian Territories – the first time a member of the monarchy has visited on behalf of the government.

The Israelis and Palestinians have been locked in a decades-long conflict that in essence is a dispute over land.

William was keen to travel to the region and his presence in Ramallah will be interpreted as an acknowledgement of the plight of Palestinians, while in Jerusalem he will be showing solidarity with the Israelis.

The duke is likely to avoid commenting publicly about the political situation wherever he travels as his thoughts could be seized upon by the other side.

Read the article by Tony Jones in The Courier and Cootamundra Herald.